The tug of war between the government and Cosatu on labour broking is set to continue after Cabinet approved two key labour bills without ceding to the union federation's demand for a ban on the practice. 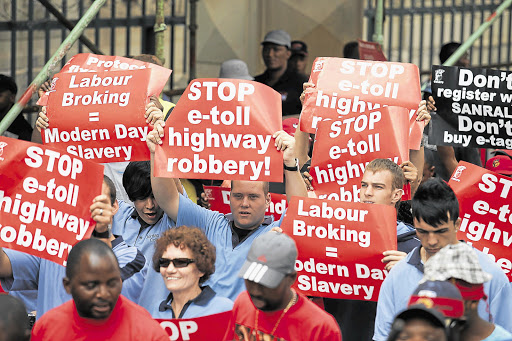 GIVE US A BREAK: The big Cosatu march in Johannesburg this week Picture: KEVIN SUTHERLAND

GIVE US A BREAK: The big Cosatu march in Johannesburg this week Picture: KEVIN SUTHERLAND

Labour Minister Mildred Oliphant told a post-Cabinet briefing on Thursday that the Basic Conditions of Employment Amendment Bill and the Labour Relations Amendment Bill would now go to Parliament and become the subject of public hearings.

Oliphant said the government had implemented the African National Congress's resolutions on labour broking in the bills, and not those of its ally the Congress of SA Trade Unions (Cosatu).

She said the legislation, therefore, rather sought to prevent the abuses that had been associated with labour broking, and did so in part by limiting temporary employment to six months.

"We are saying temporary work will be limited to six months."

Oliphant said more than a year of debate on the two bills in the National Economic Development and Labour Council (Nedlac) had led to agreement on a range of issues.

But, Cosatu made plain that it had not agreed to the way in which the bills dealt with labour broking and would continue to push for an outright ban.

"No, we did not agree, and we will continue to argue for a ban," Cosatu spokesman Patrick Craven said.

"There will now be public hearings and we will go there and argue that it is the only effective way of implementing the ANC's election manifesto which agreed to address what the president called serious abuses and what we would call exploitation.

"Further regulation will not be sufficient, because labour broking exists precisely as means to avoid regulation."

Craven said a meeting between the ANC and Cosatu to discuss labour broking and other reasons for the protest would go ahead as planned on Monday.

Aadil Patel, head of employment practice at Cliffe Dekker Hofmeyr, said the bills were a response to the increasing formalisation of work in South Africa and offered further protection of security of employment and further regulation of temporary employment."

Patel said business should feel relief at Cabinet's approval of the legislation after years of uncertainty and start planning for their implementation, possibly in the second quarter of the year.

"I've believed that the uncertainty has created more angst than anything else. The time is now ripe for companies to commence considering the impact of these amendments.

Democratic Alliance labour spokesman Ian Ollis said on the whole the amendments approved by Cabinet were more job-friendly than initial drafts of the bills, and saluted government for not banning labour broking.

"Whilst we do believe that significant changes still need to be made to increase employment in our economy, these latest announcements at least represent a move in the right direction."

Ollis pointed out that early drafts of the bill sought to ban some forms of temporary and contract work, and would have cost more than two million jobs.

Oliphant said section 198 of the Labour Relations Amendment Act would apply to all employees and limit temporary employment to "genuine temporary work".

The bill assures additional protection for workers who earn less than R172,000 a year.

It regulated contract work by stipulating that those who earned below the threshold could be employed on a fixed-term contract for longer than six months, only if the project was of limited duration, or the employer could demonstrate a justifiable reason for limiting the length of the contract.

Those who employed less than 10 people were exempt from this provision, as well as those who had a staff of 50, but had been in business for less than two years.

The bill also introduced what Oliphant called "important amendments" to clamp down on illegal and violent labour action.

The two other bills in the labour legislation overhaul -- the Employment Equity Amendment Bill and the Public Services Bill -- were still being debated in Nedlac, Oliphant said.

The deadline for the discussions to conclude was April, she said. If the forum failed to finalise them by then, the government would take the bills to Parliament.