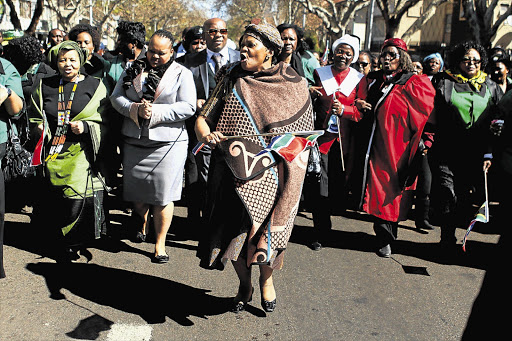 Premier of Gauteng Nomvula Mokonyane, first lady Nompumelelo Ntuli and Minister for Women, Children and People with Disabilities Lulu Xingwana lead a march from Lillian Ngoyi Square to the Union Buildings in Pretoria yesterday in commemoration of the 1956 women's march against pass laws

The National Council Against Gender-Based Violence is to be started soon to help protect women, Women's Minister Lulu Xingwana said.

"Cabinet approved the establishment of the council... which is a high-level national response to the scourge," Xingwana said in a speech prepared for delivery at a conference for women judges in Port Elizabeth.

Xingwana said the council, to be led by Deputy President Kgalema Motlanthe, would be established in two weeks.

Its work would include the reviewing and monitoring implementation of the 365-day national plan to prevent violence against women and children, adopted in 2007, Xingwana said.

"We are confident that the work of the council will lead to a significant reduction in the incidents of violence against women and children."