I did not say Zuma is politically bankrupt: Mbalula 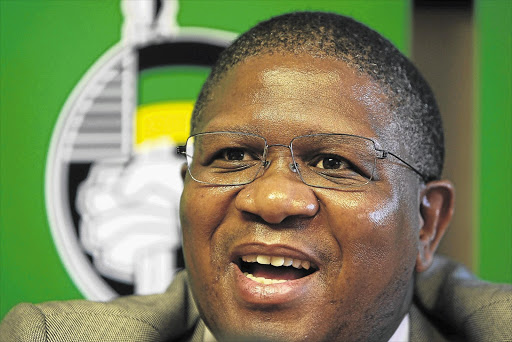 Mbalula said that a report in The Star was a fabrication aimed at causing sensation.

"At no stage of our conversation [his interview with the journalist] did I refer to President Zuma as marrying every week in and out, and being politically bankrupt," Mbalula said.

"This is absolute nonsense and must be dismissed as such. It is not in my nature to play the man and not the ball, because anything of this sort would amount to cheap politics and character assassination."

In the report, Mbalula was quoted as attacking the president and rebuffing efforts by Zuma lobbyists to "neutralise" him.

According to the newspaper, he denied claims that he agreed to support Zuma two weeks ago at the ANC's Luthuli House headquarters in Johannesburg.

"I have no time for Zuma. He has caused his own problems. He marries every week," he reportedly said.

Mbalula said in his statement that he would never "stoop so low" as to discuss personal issues with the journalist.

"I wish to state clearly and categorically that, as we march to Mangaung, such media reports will emerge in the interest of sensationalism."

Mbalula also lashed out at KwaZulu-Natal ANC secretary Sihle Zikala, who "served with me in the ANC youth as secretary general", and at Eastern Cape ANC spokesman Mlibo Qoboshiyane for not trusting him.

"For anyone not to give me the benefit, whether I said this or not, and quickly jump on the bandwagon to lynch me and vandalise my political being is totally disingenuous and a display of political opportunism with clear ulterior motives."

The KwaZulu-Natal ANC said earlier that Mbalula had to withdraw his comments.

"If he fails to withdraw the statements, we would suggest he resigns as an NEC [national executive committee] member and as a sport minister," it said.

"We have observed his desperate attempts to get elected to the ANC top six in Mangaung... .

"Perhaps Cde Mbalula should be reminded that in the ANC people do not campaign for themselves, but instead are nominated by ANC structures."

"Given the fact that he follows in the shoes of the expelled ANC Youth League president [Julius Malema] in insulting the president, it is clear that Comrade Mbalula's mind still thinks and acts like a child," he said.

"Minister Mbalula [must] now focus his political razzmatazz on sports infrastructure development and not on insult development."

National ANC spokesman Keith Khoza told The Star: "It is difficult for us, as the ANC, to comment because we haven't spoken to the president, and neither did we speak to Mbalula.

"We are not even aware if the discussion between them did happen."