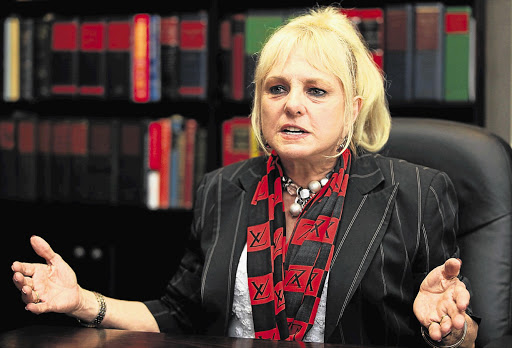 The sentence of the fine and correctional supervision for 90 counts of theft was "disproportionately lenient", Democratic Alliance justice spokeswoman Debbie Schafer said.

No mention was made of the remaining R25.5 million, which had "clearly enabled" Machanik to live in the lap of luxury.

Despite causing suffering to many, she did not have to spend a single day in prison.

The DA was concerned Machanik's sentence gave the impression South Africa was soft on corruption.

Schafer promised to raise the plea and sentence agreement the next time the National Prosecuting Authority briefed the justice portfolio committee in Parliament.

Business Day reported on Tuesday that Machanik was fined R1.5 million after pleading guilty to 90 counts of theft. The plea and sentence agreement was made an order of the Johannesburg Specialised Commercial Crimes Court on Monday.

She was ordered to pay R300,000 upfront and the remainder in monthly instalments. Last month, she pleaded guilty to thefts involving R27 million.

Her lawyer Sam Cohen was confident she would be able to pay the fine in monthly instalments of R25,000. The court withdrew charges against her co-accused Bruce Bernstein, who was the chief financial officer of Wendy Machanik Property Holdings.

The two were arrested last year on charges of conspiracy to commit fraud, failure to keep accounting records, and failure to reflect over 100 transfers between the company's trust and business accounts.