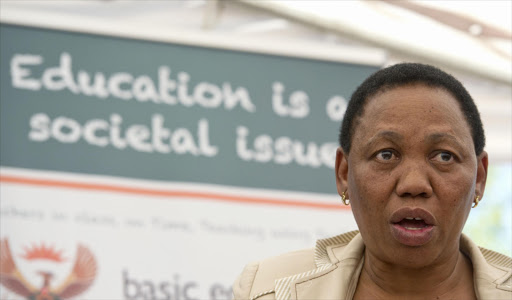 Moshesh Senior Secondary School pupil Palesa Manyokole wanted the court to act against those responsible for standards at her school, EE said.

The school is in Queen's Mercy, a rural village near Matatiele.

"Learners from the school first wrote to Equal Education in 2012 to ask for the organisation's assistance," it said in a statement.

"Equal Education visited the school to assess the situation, and found several problems at the school which were seriously hampering learner progress."

The matter was postponed to October 22.

Manyokole's application was against Motshekga, the Eastern Cape education MEC, the school principal, and the school governing body.

"In light of the fact that major issues still need to be resolved, Equal Education is pushing ahead with the case," it said.

Basic education spokesman Panyaza Lesufi said if the department received a notice it would appear in court.

"We believe this case is part of the gimmick of the EE to embarrass the department," he said.

"The department already opened 22 schools in the Eastern Cape and plans to open more to eradicate the bad conditions in schools. EE are misleading and using children to fight their issues."