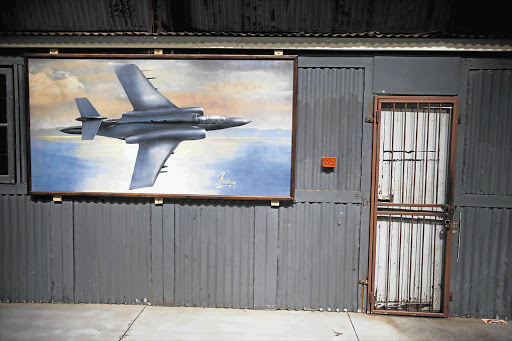 A painting in the SA Air Force Museum at the Swartkops Airfield in Centurion. The 2013 SAAF Museum Air Show takes place on Saturday.
Image: DANIEL BORN

The DA will ask Parliament's defence joint standing committee to schedule a meeting to discuss the "crisis" in the SA Air Force (SAAF), spokesman David Maynier said on Wednesday.

He was responding to a news report that 18 Agusta A109 helicopters had been grounded because there was no money to operate them.

"The Minister of Defence and Military Veterans Nosiviwe Mapisa-Nqakula must explain why things have been allowed to deteriorate to the extent that the SAAF Agusta A109 light utility helicopters have effectively been grounded," the Democratic Alliance MP said.

The aircraft were purchased at a cost of close to R2 billion as part of the controversial arms deal.

"Because of this only 71 flying hours have reportedly been allocated to the operational fleet of approximately 20 Agusta A109 helicopters."

This meant the helicopter pilots could lose their qualifications as a result of not being able to fly the minimum number of hours needed.

"Ironically, there seems to be no shortage of funds to transport VIPs --including President Jacob Zuma and the minister -- on helicopters operated by the SAAF," said Maynier.

"The SAAF are in danger of being reduced to an airborne taxi service for VIPs."

Earlier on Wednesday the defence department refused to comment on the allegations.

"My comment is very clear: we do not discuss operational matters and [the defence force's] state of readiness," said department spokesman Siphiwe Dlamini.

Beeld newspaper reported an anonymous source stating that the helicopters were occasionally enabled, but did not ascend.

Beeld reported that the SAAF's 26 Gripen fighter aircraft, which were also bought in the multi-billion rand arms deal a few years ago, were also rarely used.

Amid a 60% budget cut, it was considering selling the Gripens and not just the A109 helicopters, but all helicopter operations.

Military expert Helmoed Romer-Heitman reportedly said the SAAF was suffering from government's indecision about what it expected from the army.

"An air force without fighter aircraft is a dead duck in Africa's military context. An army without helicopters and transport aircraft is a dinosaur in a swamp," he was quoted as saying.