EFF readies for election registration as over 1 000 members recruited 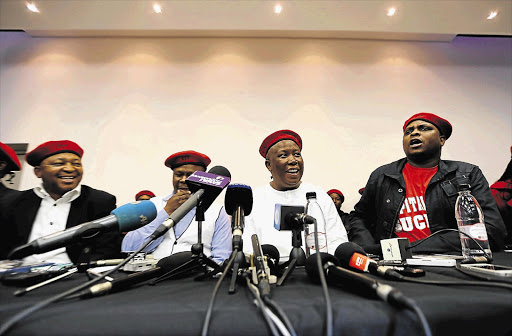 The Economic Freedom Fighters (EFF) have secured over 1 000 new members, it said on Saturday.

"We received 1 100 new members on the first day of recruiting," said party leader Julius Malema at a press briefing in Soweto.

"If this becomes a trend then we will be getting 1 000 member[s] every day. It is going to be bigger than what we expected."

This exceeded their expectations, he said.

The EFF – which had gathered at the the Uncle Tom community hall for a two day national assembly – plans to contest next year's general election.

Malema said the EFF would be officially registered with the Independent Electoral Commission (IEC) on Monday after a few amendments had been made, including changes to its logo.

The EFF logo depicted an arrow instead of a spear, and this was to be changed.

Malema said the party would register with double the required number of members needed to contest the election.

"I was told by the IEC that we should have 500 members to register but we are going register with 1 100 new members," the former ANC Youth League leader said.

Malema is facing corruption charges in the Polokwane Magistrate's Court. He is accused of making nearly R4 million from corrupt activities, and is out on bail of R10 000.

He faces charges of fraud, corruption, money-laundering, and racketeering.

On Saturday, Malema acknowledged that intimidation was part of politics, but expressed concern about the alleged intimidation of his members.

He said "people with pangas" had intimidated his members during an EFF meeting in the Vaal, but did not say when this happened. He noted that intimidation tactics were worse in Mpumalanga.

"I am more worried about Mpumalanga because they have the potential to kill," he said.

Malema also encouraged Congress of South African Trade Unions (Cosatu) general secretary Zwelinzima Vavi and his wife to stay strong amid the rape allegations against him.

Vavi's lawyer Dup de Bruyn said earlier that a case of extortion was opened against a woman who allegedly tried to blackmail Vavi. He said the case was opened at the Sandton police station on Thursday evening. Police spokeswoman Captain Kym Cloete verified this.

In a statement, Vavi denied the rape of a Cosatu colleague, saying he had been in a consensual extramarital affair with the woman.

Malema said he expected Vavi's wife to stick by his side and not allow "his detractors any room for joy".