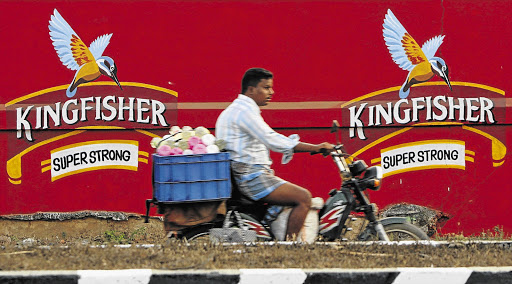 FLEETING MESSAGE: A man rides past a beer advert in India. Commenting on the proposal to ban alcohol advertising, Michael Mabasa, spokesman for Brandhouse, said: 'We do not think people drink because they were influenced by a billboard that is shown on the highway'
Image: Picture: REUTERS

"The intention of the bill is to reduce the exposure to the advertising and promotion of alcohol," she said in a statement on Friday.

"The harmful use of alcohol has significant negative impacts on individuals, families, communities, the economy and the country as a whole."

She said Cabinet approved that the Control of Marketing of Alcohol Beverages Bill should be gazetted for public comment on Wednesday.

It was the state's responsibility to protect the health and well-being of South Africans and research indicated that alcohol advertising influenced behaviour negatively, she said.

A study of 20 countries over 26 years found that alcohol advertising bans did not decrease the consumption of alcohol.

"Alcohol advertising still glamorises and encourages the use of a product that causes serious harm to individuals and to society and, despite claims from the industry that children and youth are not targeted, international research indicates that advertising does influence child and youth behaviour.

"This Bill was drafted on the basis of all this evidence," Dlamini said.

Experts involved in the drafting on the Tobacco Control and Tobacco Control Amendment Acts gave an input and the regulatory assessment indicated that a comprehensive approach was the preferred option.

"Alcohol consumption in South Africa results in significant morbidity and mortality, increases violence, crime and road traffic crashes, has major consequences for individuals, families and communities and impacts negatively on education and the economy," Dlamini said.

"The tangible cost to the country of alcohol-related harm across government departments have been estimated at around R38 billion while research indicates that the intangible costs could be as high as R240 billion."

She said the tangible cost was twice what government received from excise tax and Value Added Tax on alcohol combined.

Alcohol is the third leading risk factor for death and disability in the country and was responsible for around 130 deaths every day, Dlamini said.

On August 26, the SA Chamber of Commerce and Industry (Sacci) said restricting marketing on alcohol would have a negative affect on the industry and the economy.

Sacci CEO Neren Rau said the motivation given for the ban was understood but said it would not address the ills attributed to the misuse of alcohol and that banning alcohol would not produce the required results.

"Alcohol abuse is a symptom of more serious socio-economic and unemployment challenges that face the country. Alleviation of alcohol abuse will be achieved if these challenges are addressed," Rau said.

Rau said elements of the bill indicated a high degree of intervention in business.