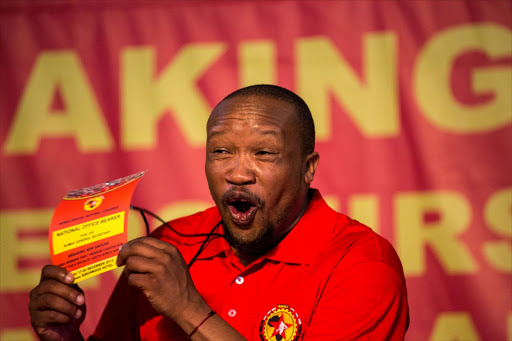 South Africa's biggest union will not support the ruling ANC in elections next year, its general secretary said on Friday, in a blow to President Jacob Zuma, whose political support with the working class is fast eroding.

The 330,000-member National Union of Metalworkers of South Africa (NUMSA) also called on Zuma, who was booed at a memorial for anti-apartheid legend Nelson Mandela on Dec. 10, to resign.

The loss of the union's support is another sign that the broad labour alliance forged with the African National Congress (ANC) in the common struggle against apartheid is falling apart.

"NUMSA as an organisation will neither endorse nor support the ANC or any other political party in 2014," General Secretary Irvin Jim told a news conference at the end of a meeting of its members.

NUMSA is the biggest block in the COSATU labour grouping, which is itself part of a formal three-way governing alliance with the ANC and South African Communist Party (SACP).

However, NUMSA has been increasingly at odds with all three over the last year, accusing them of neglecting workers in favour of "neo-liberal" pro-business policies.

Jim said that NUMSA officials or workers could campaign for the ANC but would have to do this "in their own time and using their own resources."

"It is clear that the working class cannot any longer see the ANC or the SACP as its class allies in any meaningful sense," he said.

The ANC is expected to win next year's election, although there will be serious questions about Zuma's leadership if the party falls short of 60 percent of the vote after being in power for two decades. In recent elections the party has exceeded 60 percent by comfortable margins.

NUMSA's decision could hurt the ANC by depriving it of a formidable "get out the vote" machine for the 101-year-old former liberation movement.

Union support helped propel Zuma to power in 2009 but the relationship has soured since police shot dead 34 striking miners at Lonmin's Marikana platinum mine last year, the bloodiest security incident since the end of apartheid.

There has also been a public outcry over a $21 million state-funded security upgrade to Zuma's private home.

"This is a very serious blow to the ANC. NUMSA represents the core of the urban, African working class in sectors such as manufacturing and this is the defection of that historic ally," said political analyst Nic Borain.

Zuma, a polygamous Zulu traditionalist, has built a political base for himself in rural areas of his native KwaZulu-Natal province and risks alienating urban voters.

"There is a strong sense there is a rural, ethnic pole on one side, and an African, urban working class pole on the other and it is the latter that is leaving the ANC," Borain said.

NUMSA also said it planned to seek new members in other industrial sectors, overturning a central anti-poaching principle in the union movement, and posing a threat to the COSATU-aligned National Union of Mineworkers (NUM).

Until recently South Africa's biggest union, NUM has lost tens of thousands of members in the platinum belt in the last two years to the upstart Association of Mineworkers and Construction Union (AMCU) in a bloody turf war in which dozens have died.

NUMSA's encroachment into the domain of either union could destabilise already fractious labour relations.

"If NUMSA competes with NUM and AMCU for members, it significantly raises the risks for instability in the mining sector," Borain said.