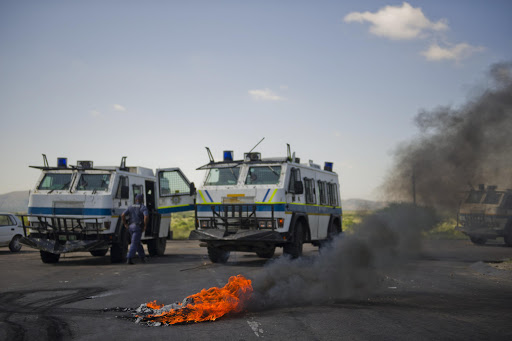 The SSG 12-gauge rounds, which contain pellets, were officially discontinued by the SA Police Service in 2006, and were "not supposed to be used", he told reporters in Pretoria.

Three people died and one was fatally wounded on January 13, during protests about water services in Mothutlung. Two of them were allegedly shot by the police, a third died in a fall from a moving police vehicle, while the fourth, who was shot in the head, died in hospital the next day.

Responding to questions, Mthethwa said no "live" ammunition was used by police at the protest.

"I explained that there are rounds which are known as SSG, or 12-gauge rounds... which were not supposed to be used, but that's not live ammunition, it's mainly pellets."

Mthethwa said a police investigation had discovered these rounds were used.

"[Police officers] were told about this [at the time]. So this is one area that was not observed, as it were. There will be others as well," he said.

The investigation also found that 14 members had not complied with certain core internal operational prescripts.

"Further... the force used to disperse the crowd was disproportionate," Mthethwa said.

"Six are already suspended. Others are being served with their suspension notices."

The disciplinary process could take up to 60 days.

All of them were "well-experienced and practised" members of the public order policing unit, Mthethwa said.

According to police, a total of 185 shots were fired at protesters in Mothutlung last week during the water delivery protests.

These included "rubber" shot and the discontinued SSG rounds, two stun grenades and a number of smoke grenades.

On the protests taking place in North West's platinum belt, Mthethwa said he had warned organisers in a meeting on Thursday to keep them peaceful.

"[I told them] the onus is on them to make sure people do not break the law.... They must not abdicate their responsibilities."

He also called for a wider debate on what he called "the violent nature of our society", particularly during protests.

He questioned why protesters resorted to violence.

"Why, in a democratic country like ours..., where people are free to express themselves..., why would people disregard the law, not follow the law, not apply to march?

"And why would people carry weapons? I'm saying that we should look at this matter broadly."

Mthethwa said the police had responded to about 13,000 "crowd-related incidents" last year, of which 1882 were "violent incidents".

He denied there was a "culture of impunity" within the police.

"We are a caring government, and therefore there is no carte blanche that we give to our officers to kill innocent people who protest."