Living in a shack won't inspire the poor: Malema 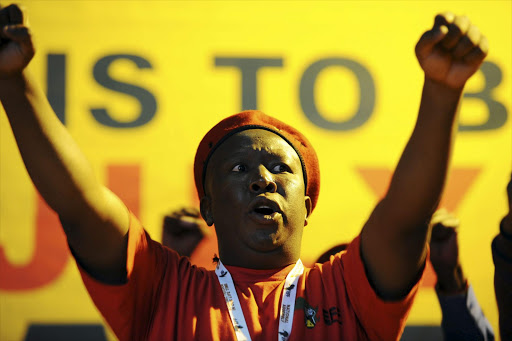 EFF leader Julius Malema on Tuesday claimed he could not inspire the poor if he was living in a shack himself.

"How are you going to inspire them when you are also going to stay in a shack?"

Malema said it was stupid to think otherwise.

"We don't have to stay in Alexandra [north of Johannesburg] to liberate people of Alexandra.

"They want to get out [of] that situation, they don't want people to come and join them. That's stupidity to think like that," he said.

Malema has been criticised for his lavish lifestyle despite claiming to be the voice of the poor.

According to reports over the weekend, Malema stood on the back of an old truck addressing supporters while the silver buckles of his Louis Vuitton shoes gleamed in the sun.

During his days as African National Congress Youth League leader, Malema was known for his expensive watches, cars and designer clothing.

Malema has since found himself in financial trouble over the non-payment of his tax.

In February, the High Court in Pretoria provisionally sequestrated him. He has until May 26 to give reasons as to why this should not be finalised.

It took Malema 18 months, after many attempts by Sars, to file his outstanding returns. He also failed to register the Ratanang Trust for tax purposes, and Sars had to do this on his behalf. Sars attached some of Malema's property to recoup the taxes he owed.

Earlier this month, a trust was launched to collect funds to settle his tax bill.

Five trustees, all Economic Freedom Fighter members, launched the trust, referred to as the JSM Trust.

The trust was formed in consultation with a team of professionals, including qualified attorneys, accountants and tax practitioners, who offered their services to the trust free of charge, trust chairwoman Mandisa Mashego said at the time.

If Malema is sequestrated, he will not be able to go to Parliament should his party get enough votes in the election.

Malema on Tuesday said the clothes he wore were not an indication of his commitment to helping the poor.

"We'll never stop wearing anything, because your commitment doesn't derive out of what you wear.

"It's about the heart. We have the heart for the poor."