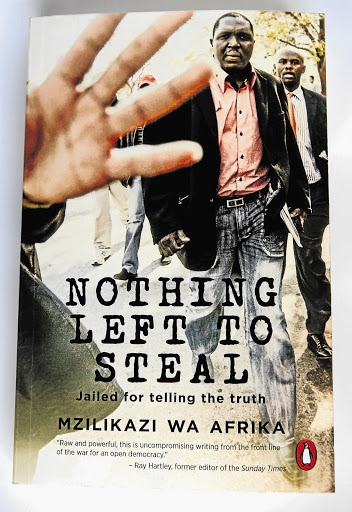 In this edited extract from his new book, Mzilikazi wa Afrika reveals the truth behind a story that helped the president duck prosecution.

Around the third week of July 2003, I received a tip-off that the Scorpions had sent [President Jacob] Zuma a list of questions. We tried every source and every trick in the book to gain access to those questions, but to no avail.

The [Sunday Times investigative] unit approached Ranjeni Munusamy, who was a senior political reporter with the Sunday Times, to see what she could do through her contacts.

A breakthrough came days later when Munusamy told us that Zuma had agreed to leak the questions to the Sunday Times and that she must fly down to Durban to collect them.

Munusamy flew to Durban on 26 July 2003 and later that morning phoned to say "the chief could only give us those questions on condition that we agree to publish a story next week that Bulelani [Nguka] was a spy".

Although I had suspected there was a motive behind Zuma volunteering to leak those questions, this came as a shocker.

"I have all the documents," Munusamy told us.

After a lot of discussion with my colleagues and our editor at the time, Mathatha Tsedu, it was agreed that if it were true that Bulelani was a spy as Munu-samy claimed the documents could prove, the Sunday Times would publish the story.

A few minutes after I called Munusamy to explain our position, a fax was rolling out the questions, which were being sent from the offices of one of Zuma's lawyers. I stood by the fax machine and collected them.

The following day - July 27 2003 - the Sunday Times had a front-page story with the headline "Scorpions to grill deputy president".

"Deputy President Jacob Zuma has been sent a list of questions by the Scorpions investigation unit about his financial interests since 1994 as part of a probe into the multibillion-rand arms deal," it began.

And it ended: "Zuma's spokesman, Lakela Kaunda, said: 'If there are any allegations against the deputy president they should be investigated properly and professionally through the correct legal structures and concluded. The investigation and quasi-prosecution must not be conducted through the media. We therefore question the motives of people who keep leaking information to the media.'"

Just hours after the Sunday Times hit the streets, Zuma gave radio interviews in which he accused Bulelani Ngcuka of leaking the questions to our newspaper.

Zuma made me angry. I felt that he had used me and my colleagues to fuel his political agenda and conspiracy. That day I lost respect for the man.

For the purpose of this book I interviewed my former boss, Mathatha, who said: "Ranjeni got the questions on the basis that the source is not going to be identified and I committed myself not to say who the source is."

I told Mathatha I would like to identify the source in my book.

Without naming anybody, he said: "We all know that they woke up with a prepared press statement to accuse Bulelani for something they know he didn't do."

As part of the commitment we had made to Zuma, Munusamy brought documents to the investigations unit that she claimed were from ANC intelligence structures. Zuma had been the overall commander of Umkhonto weSizwe intelligence from the mid-1980s to 1994. The documents suggested that Ngcuka was an apartheid spy whose agent code was RS452.

She refused to explain Zuma's outburst that Ngcuka had leaked the questions.

After Zuma's interviews on the Sunday my colleagues and I were aware we were bystanders caught in the crossfire.

I phoned a friend, a former Umkhonto weSizwe operative who was working for the NIA [National Intelligence Agency]. I asked him if he could verify for me who agent RS452 was.

Two days later, my friend called to say agent RS452 was a white woman and a former Port Elizabeth-based lawyer. It was believed that she was living somewhere overseas.

Towards the end of that week, I informed Munusamy that the story was not ready to be published as it had too many holes, but that it would be published once we were ready. I didn't tell her what I knew already about RS452 - something in my guts told me to withhold the information.

With the help of my friend from the NIA, I tried to trace agent RS452. One day he called to say agent RS452's real name was Vanessa Jacinta Brereton and her home phone number was in England.

I called the number and a man answered the phone. I explained that I was a journalist and asked to speak to Vanessa Brereton.

"What do you want from my wife?" the man asked me aggressively.

I explained to the man that I was doing a story about a former apartheid agent, RS452, and that it was believed to be his wife. I explained I just wanted confirmation from her.

After a long silence, he said: "Just hold on, I will ask my wife to talk to you about it."

After about five minutes or so, a woman was on the phone, sobbing. She asked, "What do you want from me?"

I asked her a number of questions.

She said, "Can I speak to you completely off the record?"

Brereton confirmed that she was agent RS452. Her handler had been Karl Edwards, a security branch captain at the time. She was recruited as an informer sometime in 1985 and had resigned in April 1991.

"I am so ashamed of what I did, that's one of the reasons I relocated to London. I thought my past was dead and buried but it looks as if it has come back to haunt me," she said, sobbing.

Brereton said she was a human rights lawyer and a political activist, trusted within political circles and even elected treasurer of the Walmer branch of the ANC in the Eastern Cape.

"I turned my back on my people at the time they needed me the most. I am ashamed of myself," she said.

After a lengthy discussion, I thanked her. She asked me not to publish her story. There was no good reason to do so at the time.

The following day, I informed Munusamy that the unit was not going to do the story because we were 100% sure that Ngcuka was not a spy. I did not give her all the details about Brereton, as I did not want her to be traced.

What happened next, only Munusamy can explain.

Soon thereafter we started hearing rumours that Ranjeni was trying to leak the story to other newspapers. Honestly, I thought it was just hogwash as I trusted her integrity. She was still a Sunday Times employee.

On Sunday September 6 2003, we woke up to a screaming City Press headline: "Was Ngcuka a spy?"

The story stated: "Documents leaked to City Press this week by a senior investigative journalist, which are said to have been sourced from the NIA database, identify the head of the DPP [Directorate of Public Prosecutions] possibly, but not conclusively, as apartheid police spy nicknamed Agent RS452."

Munusamy's judgment, as well as that of the City Press editor at the time, Vusi Mona, was disappointing.

Munusamy had good reasons to choose Mona as her blunt instrument. I had told her around July in the presence of our former editor and investigations unit colleagues that the disgraced former City Press editor might face an investigation by the Scorpions after his public relations company was awarded a dodgy multimillion-rand tender in Mpumalanga.

After the City Press story ran, Thabo Mbeki, president at the time, appointed a commission of inquiry headed by former judge Joos Hefer.

The Hefer commission was to look into the allegations against Ngcuka. During the commission Mona admitted to not declaring his company and he was officially investigated for allegedly receiving bribes.

Munusamy refused to testify at the Hefer commission as she claimed it would go against her journalistic principles. Zuma was also asked to testify but claimed he could not do so without the permission of the ANC.

The commission heard how [Mac] Maharaj and Riaz "Moe" Shaik had made the allegation that Ngcuka was agent RS452 and had passed this over to Munusamy as part of a smear campaign against Ngcuka and the Scorpions.

Mona lied under oath and was slapped with a perjury charge but it was later withdrawn when he publicly apologised for this act. He was later fired from City Press and the newspaper issued a front-page apology.

The commission concluded that Ngcuka was not a spy.

Brereton submitted an affidavit confessing to being RS452.

Ngcuka decided not to sue anybody. During an interview for this book, Ngcuka said it would have been "a waste of time" to sue.

"We took a decision as a family not to sue. These were not just attempts to destroy me, but also to derail the NPA's [National Prosecuting Authority's] progress in other investigations. I would have won the defamation case, simple, but it was going to be an empty victory."

He said Munusamy and Maharaj decided not to apologise. He added that he did not expect Zuma to apologise, as the president believed his hands were clean.

Ngcuka explained: "You must also remember that Zuma never said publicly that I was a spy, but he got his people to say what he was afraid to say in public. We all know that Zuma was working with them from day one. Zuma and I speak about anything from time to time but the spy saga is one thing we don't discuss."

Ngcuka said he regrets making a decision not to charge Zuma along with Schabir Shaik.

"We had prima facie evidence against Zuma but I wasn't convinced to take it to court as I had no full backing of my team; they were divided on the matter. Once you put a deputy president in the dock, you must know you are putting the whole country on trial. And I couldn't go to war while some of my soldiers didn't believe in my course. But now with hindsight, with more evidence that later came out, I think it would have been better to charge Zuma along with Shaik."

July 2003 - and the rest of the year - were turbulent times for the Sunday Times, as well as for South Africa. Political tension was extreme, because the National Prosecuting Authority was steadfast in its pursuit of President Jacob Zuma (then deputy president) and his benefactor, Schabir Shaik.

As tensions within the NPA, under the leadership of Bulelani Ngcuka, grew over whether to charge Zuma with corruption, so did the partisan positions in newsrooms across the country.

This is illustrated in the excerpt from Mzilikazi wa Afrika's book that we publish today. As a Sunday Times journalist, Wa Afrika - then part of the newspaper's first investigative unit - exposed corruption within parts of South Africa's arms deal, which is now the subject of the Sereti commission.

The excerpt does no one any favours: a bleak picture of the Sunday Times emerges, the personal involvement of journalists in pushing outside agendas and the vicious political war for survival.

The Sunday Times became a player when former staffer Ranjeni Munusamy managed to secure questions that had been sent to Zuma by the NPA. The questions came at a price though: for both Munusamy and this newspaper. This extract is a timely reminder of how easily journalists become actors in dramas orchestrated by outside directors.

The integrity of the Sunday Times would have been sacrificed had it not been for the courage of its then editor, Mathatha Tsedu.