Kebby admits he ran away from MK camp 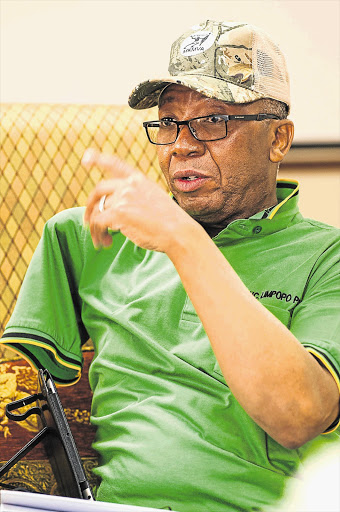 'I AM NOT A SELL-OUT': Kebby Maphatsoe
Image: Sunday Times

Kebby Maphatsoe, the deputy defence minister who accused Thuli Madonsela of being a CIA spy, yesterday admitted he had run away from an ANC military camp during the struggle days.

It was during his escape that he lost his right arm, he told the Sunday Times in an interview yesterday. He was shot by soldiers of the Ugandan army.

"My escape was for a good intention, I am not a sell-out." said Maphatsoe, who was accused this week by MK veterans of ducking duty.

He said conditions in the ANC camp in Uganda were "unbearable". He said he left due to excessive punishment, poor conditions and inadequate food at the camp, in order to report these to senior ANC leaders in South Africa.

Previously, there were two contradicting versions of how he lost his arm.

In one version, Maphatsoe, the chairman of the Umkhonto weSizwe Military Veterans' Association, said he was involved in a car accident in which he lost the arm.

In another, he said a hand grenade exploded in his hand.

Sunday Times investigations established that Maphatsoe was shot after he deserted from Ngoma camp and tried to escape to Kenya where he wanted to be repatriated to South Africa via a UN centre in that country in January 1991.

Maphatsoe also admitted in the interview that he was expelled from the camp in the northern part of Uganda after he was discharged from hospital, and sent to Kampala.

He claimed that after his return to South Africa he went to the ANC head office to explain himself.

Sitting next to MKMVA regional secretary for Ekurhuleni, Bafana Mahlabe, Maphatsoe refused to say why his brother, Joseph, was arrested and sent to the notorious ANC Quatro camp in Angola.

"Don't you think it is unfair to ask me about my brother? Speak to him, he will answer for himself," he said.

Mahlabe said Maphatsoe ran away from the camp because the conditions "were unbearable and were reported to the right structures of the ANC" but nothing happened.

Mahlabe said Maphatsoe was part of a group that decided to escape because "their concerns were not listened to."

"Logically he had no reason to run away since we were about to come home but the conditions were unbearable and they wanted to report these issues to the leadership that had already returned to South Africa," Mahlabe said.

Mahlabe admitted that although Maphatsoe and his friends "didn't know where they were going when they escaped" their intention was to go to Kenya.

"We are grateful that he didn't lose his life, just his arm," he said.

Maphatsoe said he escaped from the camp with a group but could not remember their names. "We decided that we will run one by one across the border to Kenya. One of the comrades, Craft, managed to escape through the border but I was shot with an AK47 while I was leading the line.

"My hand was like minced meat and I was taken to the hospital where doctors said I must choose whether I must be amputated or lose my life.

"In 1992 when we arrived back home we went to Shell House [the former ANC head office] to explain why we ran away."

Maphatsoe confirmed that he and others who left the camp were caught in the bush by members of the Ugandan Defence Force.

Maphatsoe also confirmed he had worked largely as a cook at the Moscow military camp in Angola, and later in Uganda, rather than as a front-line soldier. However, he said this was proof that he was one of the most trusted MK soldiers.

"To work in the kitchen you must have been security cleared. You don't just take a person because they are dealing with sensitive things. If the enemy wants to deal with us they would use the kitchen and give poison. Remember even when OR Tambo came to the camp, it was us who cooked. So it's not an easy, light thing."

He refused to say whether he regretted labelling Madonsela a CIA agent, saying the matter was "sub judice" because she was considering his letter of apology.

"There is a process that's unfolding. I can say it's sub judice because you don't know what the public protector would say about my apology. So let's leave it there for now."