Full transcripts: Everything the NPA thought was relevant from the Zuma spy tapes 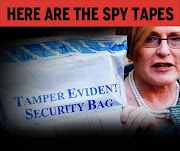 This decision was based largely on what have become known as the “spy tapes”, recordings made by the National Intelligence Agency and the police’s Organised Crime Unit of then Scorpions boss Leonard McCarthy.

For five years the DA fought the NPA and Zuma for access to the tapes, memorandums and notes related to the decision to drop charges against the President.

What follows here is the full transcript of the recordings the NPA considered relevant, providing an intimate view of the frantic politicking and paranoia in the run-up to the ANC’s historic Polokwane conference in December 2007.

It also offers candid views on some of this country’s most senior politicians.

Critically, there are also notes of the subsequent discussion among senior NPA advocates, including Zuma’s legal team of Michael Hulley and Kemp J Kemp, which would finally lead to the dropping of charges against Zuma and ultimately pave the way for him to become President of South Africa.

All of the transcripts are in .pdf format.