EFF walks out of 'bring back the money' disciplinary hearing 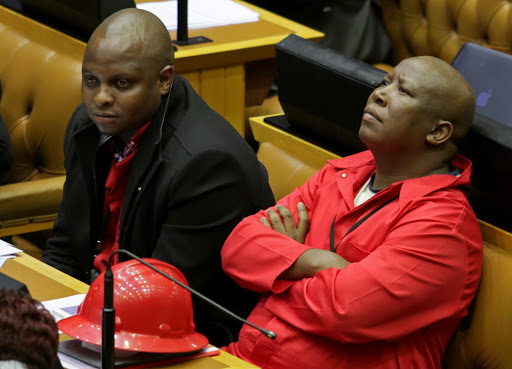 EFF leader Julius Malema on Tuesday led his fellow MPs out of a disciplinary hearing against them after saying Parliament should instead charge Speaker Baleka Mbete for disrupting presidential question time in August.

"It is our considered view that Baleka Mbete should appear before this committee because she made illegal threats to members of the EFF," Malema said in his representation to Parliament's powers and privileges committee.

"It is our considered view that Baleka Mbete should be charged because the House collapsed due to the lack of patience and leadership as she concedes that 'I lost it'."

Mbete adjourned the National Assembly on August 21 and threatened to have EFF MPs forcibly removed from the chamber after they chanted "Pay back the money" at President Jacob Zuma.

They were referring to R246 million in state funds spent on his private Nkandla homestead in KwaZulu-Natal, a portion of which Public Protector Thuli Madonsela had recommended he repay.

The EFF MPs said they would have nothing further to do with the process. They risk being suspended from Parliament for up to 14 working days if found guilty of disrupting the legislature.

EFF spokesman Mbuyiseni Ndlozi told Sapa they would be indifferent to being tried in absentia.

"We don't care," he said as they left the venue singing, leaving the committee to mull how they should proceed with the hearing in their absence.

The walkout came after two hours in which EFF MPs frequently interrupted as initiator Darryl van Voore read charges of disrupting and showing contempt for the legislature to them, at one point asking for interpreters to be brought in.

All 20 EFF MPs refused to plead to the charges.

Malema, in a 25-minute-long submission, accused the ANC and Parliament of trying to humiliate his party in a flawed and unconstitutional process.

"The embarrassment and humiliation the ANC is seeking to impose on the EFF knows no bounds," he told the committee.

Malema added that all members of the ruling party were potential witnesses in the hearing and could not be trusted to be neutral because disagreeing with Mbete, who had wanted to suspend the EFF MPs, would prove "career-limiting" for them.

He pointed out that Mbete was national chairwoman of the ruling party --a point repeatedly made in recent weeks by the EFF and other opposition parties who brought a failed vote of no-confidence in the Speaker.

Malema said "since neither your common sense nor the courts can resolve this conflicted role you are in, you are at liberty to do as you wish, but posterity shall judge you".

He went on to say that the charges would not hold water as Mbete never named the MPs she expected to leave the chamber, and that they could not be punished for signing after she adjourned proceedings because in that instance the rules did not apply.

He added that ANC MPs had made a habit of singing in the National Assembly, notably Zuma's "Awulethu' Mshini Wami" song.

"Members of Parliament on previous occasion have sung and chanted even when the House was in session. Members of the ANC have sung Mshini Wami in the House and have never been disciplined.

"The charge which we are expected to answer here does not hold water and does not deserve our attention."

He concluded his speech by saying: "Whatever the outcome of this process, the EFF will not be participating."

Called on by committee chairperson Lemias Mashile to clarify what he meant, Malema told him: "Chairperson, we are not going to be subjected to you and your ANC colleagues. And we have given reasons why. And we are saying to you that if you decide to proceed, you can proceed on your own. We are not party to this. This is an illegitimate, unconstitutional process and we reserve our rights."

The walkout comes 10 days after the EFF and all other opposition parties withdrew from the parliamentary ad hoc committee considering the findings of investigations into misspending at Nkandla.

They withdrew in protest after ANC MPs on that committee signalled that they would not enforce Madonsela's instruction that the president pay back state funds spent on adding luxuries to his home.