ANC votes down motion to call Zuma over Nkandla 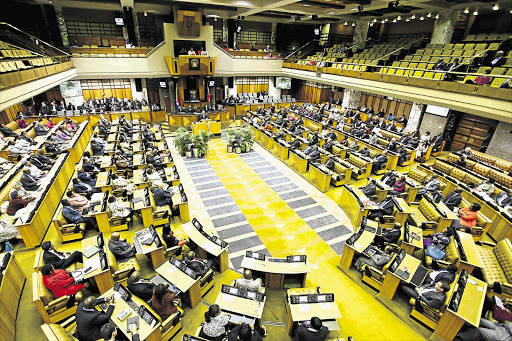 TURNING OFF THE TAP: The National Assembly listens to Finance Minister Pravin Gordhan's medium-term budget policy statement. He told public servants they could no longer drink with the public's money

The ANC majority on Thursday voted down an opposition motion in the National Assembly that President Jacob Zuma must be called to appear before the ad hoc committee mulling reports on misspending on his Nkandla home.

The motion, introduced by Democratic Alliance parliamentary leader Mmusi Maimane, included a call to allow Public Protector Thuli Madonsela to brief the committee and to uphold her directive that Zuma repay some of the R246 million spent on upgrades to Nkandla.

"President Zuma can't run away from accountability," he pleaded.

The Economic Freedom Fighters, Inkatha Freedom Party, Congress of the People, and Freedom Front Plus backed the motion. Like the DA, they said they would return to the committee if it were adopted.

The opposition withdrew from the committee last month in protest at the ANC's refusal to call Zuma or other witnesses, and to accept that remedial action proposed by Madonsela was binding.

The opposition motion was moved as an amendment to a motion tabled by the ANC to extend the lifespan of the committee, which was due to expire on Friday, until November 14.

The extension was adopted by the House, but the committee is likely to continue without the opposition parties as they made their return contingent on the revised mandate rejected by the ANC.

EFF spokesman Mbuyiseni Ndlozi termed the committee "an ANC affair" which might as well sit at the ruling party's headquarters in Luthuli House in Johannesburg, rather than the legislature.

Addressing the chamber, he said Zuma had to answer a single question: "When will he pay back the money?"

FF Plus MP Corne Mulder said it was sad that the ANC had refused to call a single witness, never mind the president, and to get an independent legal opinion on Zuma's stated insistence that Madonsela's findings were not binding on him.

The opposition argues this flies in the face of the Constitution.

"South Africa and the rest of the world will take note that you are not prepared to do what the Constitution says," Mulder warned.

The ANC said the opposition's motion was a frivolous attempt to force an argument that it had lost in the committee itself.

"It is not late for them to come back to the ad hoc committee and make a contribution instead of howling and entertaining us with their endless stunts from the outside," ANC Chief Whip Stone Sizani said in a statement.

The committee, which still has a quorum despite the opposition boycott, was expected to adopt a draft report earlier this month but parliamentary content advisers asked for more time to prepare it.

All indications are that the report will absolve Zuma from responsibility for the cost of a so-called security upgrade to his homestead in Nkandla escalating to R246m.

ANC MPs have argued that the president could not have known that the project spiralled out of control and said suggestions that he should reimburse the state were "absurd".