How the SADF plotted to kill Thabo Mbeki 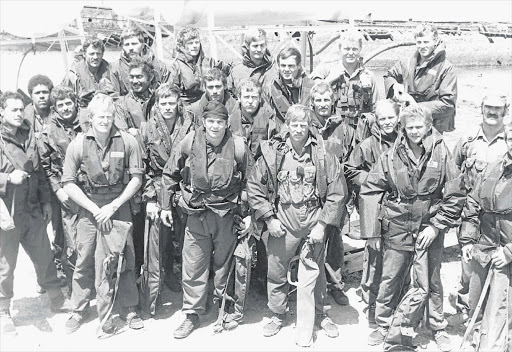 Commandos of the 4 Recce team who operated far from their base, for up to 10 months away from home and with little backup. File photo

A new book by former officers discloses details of a failed operation to assassinate ANC leaders in exile.

A secret operation in apartheid's dying days to blow up the entire ANC national executive with booby-trapped paintings was called off when a plane carrying special force soldiers turned back in misty weather.

This is one of dozens of startling revelations in a new book giving details of previously classified operations of a clandestine South African Defence Force unit in the '70s and '80s.

Although the attack on the ANC leadership at a bush lodge in Tanzania had to be aborted, dozens of other missions proved successful, including an attack on an oil refinery in Luanda and the bombing and sinking of seven ships.

The book also tells how two South African undercover commandos found themselves eavesdropping on Thabo Mbeki in a restaurant in Dar es Salaam. At the time, Mbeki was an elusive and central figure in the liberation struggle.

The book, Iron Fist from the Sea: South Africa's Seaborne Raiders 1978-1988, was published last month in the UK. It was co-authored by two SADF officers, Lieutenant-Colonel Douw Steyn and Rear-Admiral Arnè Söderlund. It lifts the lid on one of the most feared SADF special force units, 4 Reconnaissance Regiment - "4 Recce" - a seaborne unit that worked with the navy to hit targets as far away as Cabinda in Angola near the mouth of the Congo River.

Steyn and Söderlund spent more than five years tracking former members of the unit, which was based on a stretch of coast near Langebaan, north of Cape Town.

"The files we needed were top secret," Söderlund said this week. "The senior person at the SANDF [South African National Defence Force] archives suggested we apply for them to be released, and surprisingly the SANDF agreed to release most and declassify them for us."

He said assistance was also provided by Russian veterans to ensure an accurate account.

"A small number of ex-SADF members were not happy about the book being published, but we felt that history had to be recorded, and knew that all operations were carried out with proper political approval and oversight and strictly controlled," said Söderlund.

The book was also based on the authors' personal experience. Steyn was operational commander of the 4 Recce raiding group and Söderlund was a navy strike craft commander and later South Africa's military attaché in London and head of fleet force preparation in the post-apartheid navy.

The writers reveal chilling details of the planned attack on the ANC leadership at a hall in Tanzania.

"The plan was then to infiltrate the hall and place explosive charges with demand detonation and antitamper devices inside. EMLC [a specialist weapons-manufacturing company] designed and supplied the explosive charges, which were disguised as the frames of wall-mounted photos of ANC leaders and would be attached to the walls of the conference rooms by 'wondergom' [wonder glue]," the book said.

The plan came unstuck when poor visibility forced the aircraft carrying soldiers to divert to Malawi, where their parachutes were sunk to the bottom of Lake Malawi.

Weapons and explosives were buried for future use.

"After a short break, the cancellation of the mission was confirmed and the teams all returned to South Africa. Aborting the mission was a great disappointment, for all had been confident of success. For the ANC and its armed wing, it was certainly divine intervention," the book said.

Mac Maharaj, a former member of the ANC national executive, said he was not aware of the incident because he had been working under cover in South Africa at the time as a key member of the ANC's Operation Vula, which aimed to smuggle ANC leaders back into the country.

"But I am aware of other attempts [to attack the ANC executive] at different times," said Maharaj, now the presidential spokesman.

The book also gives a detailed account of an unexpected encounter between two undercover soldiers and a young Mbeki during informal Christmas drinks at a Dar es Salaam restaurant. The soldiers claimed they were able to eavesdrop on Mbeki's conversation and glean valuable information.

"With a table close to the railings, they were enjoying their second beer when a group of three, a white male and a black couple, took the table next to them.

"The black male's face was vaguely familiar, but it was only after they were seated and commenced a conversation that the two operators realised the unique situation they were in as all conversation was clearly audible."

Veteran defence analyst and writer Helmoed Heitman, who wrote the book's foreword, commended the authors this week for documenting a largely secret aspect of the "undeclared war" of the '80s.

"This is the first authoritative study and written by one of the key actors in the SF [special forces] side and a naval officer with close insight and who participated in some of the operations. So it is the facts as they actually played out, as opposed to just some recollections or someone working purely from files," Heitman said.

"I think anyone in the special forces or naval world will realise from the book just how demanding some of these operations were, carried out over extreme distances and with very little backup if anything went wrong.

"The South African Navy and 4 Recce between them were by the late '80s probably the most experienced people in the world in the maritime insertion/ extraction of special forces teams," he said.

Steyn said the motivation for the book was partly to recognise the bravery and accomplishment of the unit.

"You must remember that my soldiers worked very hard and long hours. We were gone from home nine to 10 months a year and only trained at night while in Langebaan. We executed very complicated and dangerous operations, with no recognition.