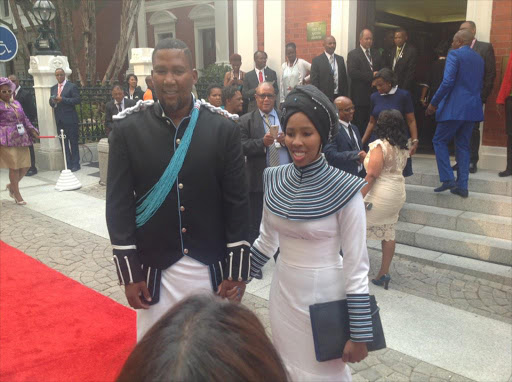 ANC MP Mandla Mandela did not expect anyone to disrupt the state-of-the-nation address on Thursday evening, he said on the red carpet.

"I don't see any disruptions," he said, laughing.

"We have parliament, we have the President [Jacob Zuma] speaking and that is what all South Africans want to hear today," he said outside the National Assembly.

The grandson of the late statesman Nelson Mandela said he hoped to hear news on rural development in the Eastern Cape, where he was from.

"As you know, our people are living in extreme measures of poverty and we would like to see what would be done in speeding up that process."

Mandela was dressed in a formal black jacket, with white epaulettes and a string of turquoise beads across the front, and a white skirt with black trimming.

His wife Nodiyala wore a matching outfit and black headdress.

The Mandelas warmly greeted Dali Tambo and his wife Rachel with hugs and kisses.

Tambo, the son of ANC stalwart Oliver Tambo, strutted on the carpet in a custard-yellow jacket, black pants and sunglasses. His wife wore a matching ballgown.

Matching his sunny outfit, Tambo said he was expecting to hear Zuma speak about all the hard work that had been done over the years and policies that had been given much thought.

"...We are winning, we are a united country, we are on the cusp of greatness and we have challenges, every single country in the world does, but we are doing very well as the ruling party, as the ANC, to bring a more egalitarian society into being."

He hoped Zuma's speech would not be disrupted and that MPs would behave like ladies and gentlemen.

Cape Town city mayor Patricia de Lille agreed there should be a sense of decorum, but did not think it was incorrect of the Economic Freedom Fighters (EFF) to ask Zuma a question.

The EFF had promised to do so because they believed Zuma would not come to Parliament at another time to be held to account.

"I think if the EFF ask the president a question, he must answer it and they must sit down," De Lille said.

"If they still continue to cause chaos, then we know they are just there to disrupt."

De Lille, demure in a navy blue dress and jacket, was expecting Zuma to give leadership on the electricity crisis at Eskom.

She was not part of a red carpet boycott by Democratic Alliance MPs, who were seen walking into the national assembly in a variety of black outfits.

"The DA are all wearing black and it's just in protest to the state of things in Parliament. Our leader will make a formal announcement just now," said DA MP Ian Ollis, dressed in a black suit.

Public order policing officers entered the precinct about 90 minutes before Zuma was due to start speaking.

Dressed in black and white and wearing tags marked "high security", they confirmed they were from the anti-riot unit.

DA spokesman Marius Redelinghuys and Cape metro chairman Shaun August were arrested by riot police ahead of the address.

"Water cannons were fired into the backs of supporters who posed no threat to the police and were trying to escape harm," she said.

Zuma will arrive in Parliament Street after 6pm, following a cavalcade through the city's streets, which have been cordoned off by the police.

Traffic was at a standstill in many roads in the Cape Town CBD as vehicles were diverted away from the parliamentary precinct.