How Maharaj tied himself in knots for Zuma 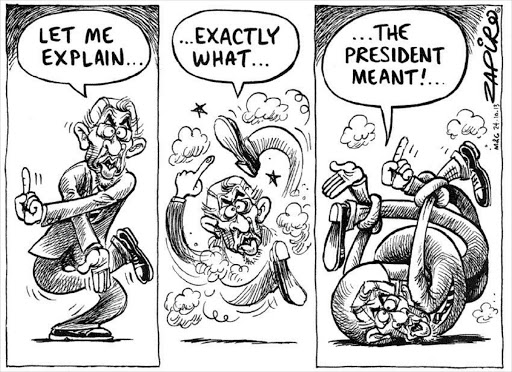 His name had become so synonymous with explaining and justifying President Jacob Zuma's controversial claims and positions, that it is difficult to imagine the Union Buildings without Mac Maharaj.

The 80-year-old Maharaj, whose real names are Sathyandranath Ragunanan, announced this week that he will be retiring - yet again - at the end of the month.

Zuma fetched his long-time comrade from retirement and made him spokesman in July 2011 following a number of scandals that had rocked his office at the start of his administration.

Since taking over from Zizi Kodwa, who is now ANC spokesman at Luthuli House, Maharaj has become well-known for trying to explain his boss out of trouble.

These explanations have taken a number of different forms.

Maharaj has often suggested a controversial Zuma statement was inherently unexceptional and that the media was responsible for exaggerating and misrepresenting his real intention.

In November 2012, Zuma pleaded with the House of Traditional Leaders that South Africans "solve African problems the African way, not the white man's way", and claimed "some Africans" have "become too clever" at criticising their own culture.

Following an uproar, Maharaj stated that the president's remarks had "been sensationalised by some newspapers to the point of being grossly misleading".

But Maharaj was also capable of simply denying a statement as it appeared. In September 2012 Zuma told parliament, "We have more rights here because we are a majority."

In response, Maharaj simply said, "Nothing could be further from the truth" than the suggestion that the president was trying to elevate the majority above the minority. He also claimed the president was "stating a fundamental democratic principle".

On occasion, Maharaj would offer no comment at all.

Perhaps most notoriously, Maharaj repeatedly offered a "no-comment" response to reports in August 2013 that an ambulance transporting Nelson Mandela to hospital had broken down. To claims - amid intense global interest - that the Nobel laureate's condition had deteriorated as a result of the breakdown, Maharaj would only say Madiba remained "critical, but stable".

Likewise, when Zuma argued in documents before court in October 2014 that charges against him relating to the arms deal should be dropped because corruption was only a crime in a "Western paradigm", Maharaj only said, "I am not in the position to comment on that yet."

But, when he chose to, Maharaj did have the ability to reframe the president's words into more complex ideas and sentiments.

When Zuma reportedly suggested in December 2012 that it was "un-African" for black South Africans to own a dog and warned black women that, "even if you apply any kind of lotion and straighten your hair you will never be white", Maharaj stated that Zuma was conveying "the need to decolonise the African mind post-liberation to enable the previously oppressed African majority to appreciate and love who they are and uphold their own culture".

Similarly, when Zuma stated in August 2012 that it was "a problem in society" if women stayed single and that children "give extra training to a woman to be a mother", Maharaj argued that the president was speaking in the context of "the need to build cohesive communities and families" and that "he believes strengthening the family is important to enable the building of stronger communities to deal with the many social ills facing society today".

A regular Maharaj defence was to claim a misunderstanding - specifically on the grounds that language and culture had obscured what the president intended to convey.

In December 2011, Zuma claimed that "long before the arrival of religion ... there were no orphans or old-age homes" and that "Christianity has brought along these things". Maharaj stated in response to an outcry that "the president speaks in deep Zulu on occasion and that his message is often lost in translation".

Maharaj has also been willing to fall on his sword for the president. He apologised on behalf of Zuma for his October 2013 comment that people should stop thinking like "Africans in Africa" - although, initially, he laid the blame on the media, saying, "The words have regrettably been taken out of context and blown completely out of proportion."

Whether Maharaj was successful at refashioning Zuma's more problematic claims, history will judge.

His approach to official communication was deliberative and so, very often, any clarification from the Presidency only followed after several days of public outrage. Certainly his remarks often played second fiddle to any initial scandal in the public mind.

Maharaj will probably be best remembered for his time as the international lynchpin for information concerning Nelson Mandela's time in hospital, when the global media machine focused every resource on South Africa and every development around one man.

The Presidency's standard line, that Mandela was "critical but stable", came to define his condition. It is, perhaps, a suitable description, too, for Maharaj's management of Zuma's public profile.