Where did Malema get the money? Sars reveals why deal collapsed 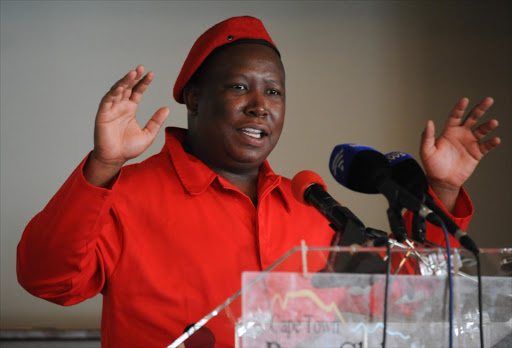 The taxman has accused Julius Malema of lying about the source of his income and has slapped him with an additional R14-million tax bill.

In court papers explaining why it dumped its deal with the Economic Freedom Fighters' leader, the South African Revenue Service says Malema lied about the source of the funds used to settle part of his tax bill.

SARS also says Malema tried to dodge paying donation tax and had received money from questionable sources to settle an R18-million tax bill - reduced to R7.2-million in a deal in May last year.

These, SARS says, are some of the reasons for the collapse of the compromise deal. The revenue service has now launched an application for Malema's final sequestration.

If the court grants the final order when the case returns to court in June, Malema will be kicked out of parliament, where his party has dominated the debate since last year's general election.

Before last year's deal, Malema had paid R3.2-million after auctioning off his homes and other assets in 2013. The final bill was then reduced to R4-million as part of that deal.

But, once the deal was nullified, SARS re-examined Malema's tax affairs for 2011 and 2012.

It then slapped him with a further R14-million bill and revised the final figure owing to R32-million. The overall figure includes interest and penalties.

In papers, SARS says Malema was not completely honest about his source of funds and had not kept his taxes up to date as promised when he signed the deal.

Malema's lawyer, Tumi Mokwena, said the source of the funds was irrelevant because the agreement did not state who had to pay.

Former EFF member Wiekus Kotze claimed earlier this week that Malema had used EFF funds to settle some of his tax bills.

According to papers obtained from the High Court in Pretoria this week, SARS says Malema's dishonesty emerged soon after they reached a compromise agreement last year.

Malema had claimed that R1-million of the R4-million he had agreed to pay SARS was a donation from a "Mr Renier Martin" and the rest would be paid by the Julius Sello Malema Trust, an entity of which he claimed he was a beneficiary and which was established to help him settle his tax bill. But a SARS investigation revealed that Martin was not the actual donor.

Yesterday, Martin said he had never offered to donate R1-million to Malema and had discussed only the possibility of offering his services as tax adviser.

But, said Mokwena, "you'll have to explain where Malema got [Martin's] ID number from. In fact he is outright lying."

Court papers show that Malema admitted to SARS that Martin had not paid the R1-million, saying it was a loan from Kyle Phillips, a director of Carnilinx, a tobacco company run by Malema benefactor Adriano Mazzotti.

Mokwena said Malema had taken out the loan after Martin failed to pay.

Mazzotti previously confirmed that he had donated money towards the R600,000 the EFF required to register as a party contesting last year's elections.

The revenue collector also found that Malema was not a beneficiary of the Julius Sello Malema Trust.

In court papers, SARS lawyer Pieter Engelbrecht says they investigated the tax status of the trust and discovered that it had not been registered as a taxpayer and had not declared any donation tax.

"[Malema] stated that he is a beneficiary of the aforesaid trust, however that trust had a bank balance of only R4000 at the time.

"It is not clear to me how the trust could accumulate the R3-million within this short period of time to make the donations to the respondent.

"In any event, it appears on scrutiny of the trust deed of the Julius Sello Malema Trust that the respondent is, in fact, not a beneficiary of the trust and that the trust was not formed in order to assist him to pay his taxes. It was formed for public benefit purposes," Engelbrecht says.

SARS informed Malema last month that the trust had not declared the donation - and a form was submitted on the same day at the SARS offices in Randburg.

Mokwena said it was not SARS's business how the trust reached a decision to pay for Malema, adding it was up to other beneficiaries to complain, not SARS.

According to SARS, Malema reneged on a promise he made as part of his agreement to declare as a donation R2.4-million he received in 2013 and paid through his then legal firm, Brian Khan.

According to court papers, Malema objected to the revised R32-million tax bill, maintaining the payments were donations and dividends.

But SARS said he should have declared as taxable income payments in 2011 and 2012, including:

According to SARS, Gwangwa testified during the tax inquiry that the payments were made to Malema because "he is a well-known and influential person in Limpopo".

In the court papers Malema repeated his claim that he was being persecuted by President Jacob Zuma's administration because of disputes with Zuma and other ANC leaders.

"There is a well-publicised general perception among the South African public that the taxpayer is being persecuted by the president and others with the aim to destroy the taxpayer's credibility as a leader in the eyes of the general populace," Malema said in his submission to SARS.

He pleaded poverty, saying he could not afford to pay the additional assessments.

He told SARS that his only source of income was his annual R1.3-million MP salary, which could be taken away if his sequestration was finalised.

Malema told SARS he had no assets except his clothes worth R50000, and beds and bedding valued at R100000.

He claimed he had run a taxi business in Limpopo using three vehicles, but this had ceased to exist when his cars were "scrapped".

He revealed that he had used R200000 from his Absa bond to establish the EFF. He listed other income in the past 12 months as:

Money from the sale of EFF T-shirts and berets;

An Old Mutual insurance policy he cashed in; and

Stipends for travel and subsistence paid by the EFF.

Malema said: "From the above it is manifest that the taxpayer is in a very precarious financial position. The sequestration of the taxpayer's estate will not benefit his creditors, including SARS."

Mokwena confirmed that his client was challenging the assessments.