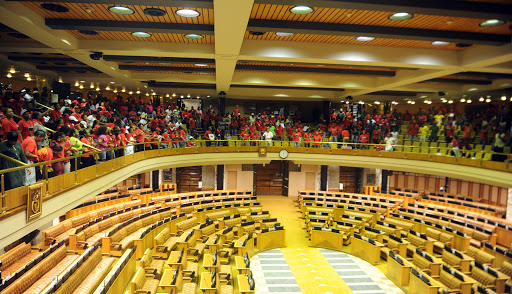 Parliament has paid out bonuses to National Education Health and Allied Workers' Union (Nehawu) members, it said in a statement at the weekend.

This comes after a recent strike by union members at the doors of Parliament that turned violent in November. The striking workers wanted payment for bonuses to be based on 12 months' salary, not on a month's salary.

In a statement to the media on Saturday evening, Parliament said the bonus payments were done in terms of the agreement reached with Nehawu earlier this month, after protracted illegal strike activity and lengthy negotiations.

Parliament said they met with Nehawu at a meeting  facilitated by the CCMA on Friday, which provided clarity to all parties on how the bonuses were to be paid.

"At the meeting, Parliament reiterated that the payments would be made as provided for in the agreement and according to policy," the statement said.

"There had to be accurate moderation to ensure the ratings tallied with institutional performance, that the set budget was adhered to in terms of affordability and that the entire process could successfully stand the test of audit."

Parliament said Nehawu leadership in Parliament had misled members to willingly commit acts of gross misconduct, knowing full well that it was an illegal and unprotected strike and, as such, constituted an act of gross misconduct on the part of employees who participated.

"The agreement reached with the union expressly states that the employer reserves the right to discipline any staff who committed acts of misconduct.

"Actions by the union leaders in Parliament placed the union members in a position of vulnerability, exposing them to an unprotected strike and committing illegal acts of disrupting parliamentary proceedings," the statement said.

Parliament said it urged the union to refrain from further deliberately misinforming employees and the public, and to stick to the letter of the signed agreement.