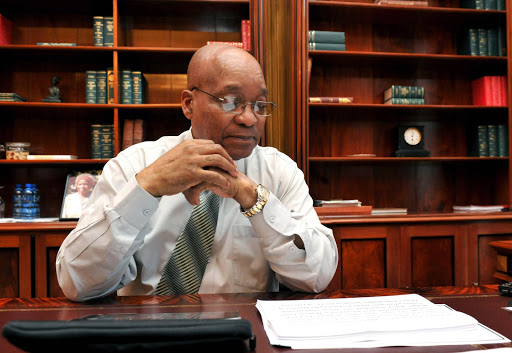 2011: President Zuma at his official residence in Cape Town using his favourite gadget iPad to prepare his speech for the State of the Nation Address (SoNA) to Parliament.
Image: Ntswe Mokoena.

For a second year in a row President Jacob Zuma’s government is forced to backpedal on provisions in the Tax Amendment Act that compel South Africans to put two-thirds of their provident fund savings in a retirement annuity.

The provision meant that retirees would be allowed to take only one-third in cash, while currently they’re entitled to the full amount.

Business Day reported that Finance Minister Pravin Gordhan tabled a proposed postponement at a meeting on Monday with the representatives of the National Economic Development and Labour Council (Nedlac).

Cosatu was vehemently opposed to the Act, which Zuma signed into law last year. It vowed to strike and withdraw support for the ruling party in the upcoming elections later this year.

In his State of the Nation address last week Thursday, Zuma hinted that government had taken note of Cosatu’s discontent over the Act and that it would try to find a solution.

The Bill has since been resubmitted to the National Assembly for consideration and the implementation dates have been changed from 1 March 2016 to 2018.

The postponement of implementation dates have sparked concerns that changes to the Taxation Laws Amendment Act would be rushed through Parliament, which would be a costly exercise for the retirement industry which has changed IT processes to deal with the new provisions.

Cosatu’s grievances over the retirement reform provisions arise from the fact that government thinks it can “decide and dictate” to workers‚ when and how to spend their salaries.

The current retirement rules state that individuals who retire are entitled to the lump sum available in their provident fund and that they may use it as they please.

Pension funds, however, have different rules. When an individual turns 65 he or she may take only one third of the lump sum in the pension fund. Two thirds must be used to buy a pension income – whether it’s an annuity or an investment-linked living annuity (ILLA).

The amendments would mean that the same rules would have been be applied to provident and pension funds. Provident fund members will therefore also be compelled to use at least two thirds of the lump sum to buy a pension income (RA or ILLA).