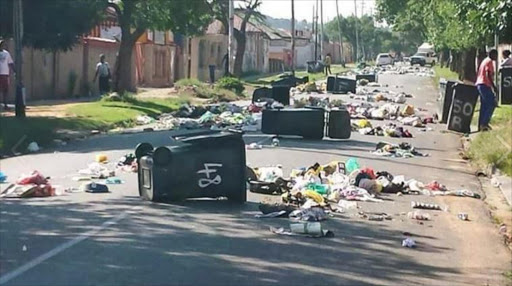 Expect your garbage to pile up in the streets for the remainder of the week as waste management company Pikitup workers have embarked on an illegal strike.

On Wednesday‚ the striking employees - affiliated to the South African Municipal Workers Union - marched through the streets of Johannesburg despite a court interdict.

Pikitup has no clue as to what resulted in them embarking on the strike‚ according to spokesperson Jacky Mashapu.

“I can’t really tell you why they are striking because there are negotiations that are currently taking place with the Political Facilitation Agreement (PFA). What I can speculate is that during the PFA‚ we told them that their issues would be prioritised but it will be a city wide process‚ so that process is unfolding as we speak‚” said Mashapu.

“What is surprising is that the representatives of SAMWU (South African Municipal Workers Union) are part and parcel of the process of the negotiations… So as to why today they decided to go strike‚ I’d just be speculating.”

Mashaphu said Picketup condemned the illegal strike‚ and could not say when workers would be back at work.

Last year in December‚ a PFA marking the end to an spate of illegal strikes by workers of the City of Johannesburg’s waste management entity‚ Pikitup‚ was signed with SAMWU. The municipal workers union entered into the agreement with the City following recent talks that were anchored on the PFA brokered on December 3 – with support from the then Gauteng MEC for Human Settlements‚ Cooperative Governance and Traditional Affairs‚ Jacob Mamabolo.

The signed PFA followed talks led by the City’s political leadership with Pikitup management and SAMWU on December 11‚ 17‚ 18 and 19. This was in a bid to find a lasting solution to the long-standing labour impasse. The parties agreed to a relief mechanism of R1‚000 to workers on level A to C in anticipation of the benchmarking exercise on parity. All undertakings are contingent to adherence to the agreement.

A city-wide process to address parity issues was also agreed upon. The PFA paves a way for greater stability in the relationship between the City and SAMWU after the parties agreed to follow all relevant legislation and‚ most importantly‚ build a relationship of trust.

The agreement ensured residents of Johannesburg and business owners were relieved of the inconvenience caused by the unprotected strike actions.

“It is clear that the union is reneging from the spirit of the agreement‚ which sought to relieve the residents of Johannesburg and business owners from the inconvenience brought to bear on their quality of life by the ongoing unprotected strike.

“Pikitup once again apologises to residents and business owners on the service disruptions. Every effort is being made to speedily address this unsolicited work stoppage‚” said Mashapu.