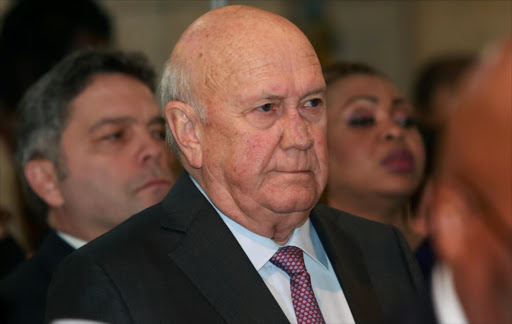 Former president FW on De Klerk on Thursday called for the ANC to put an end to “state capture”.

“I call today on the many decent members and leaders of the ANC, on the moderate and well-meaning people of the ANC, to stand up on the principles on which their movement was founded and to take the lead on putting an end to state capture and restoring a system of constitutional government that is open, governable and responsible,” he said at a Cape Town Press Club lunch.

A day before his 80th birthday, he called on all South Africans to say a “resounding no to current attempts by Zuma and his supporters to undermine constitutional democracies”.

“The time has come to draw a line in the sand to say: Up to here and not further.”

De Klerk said the constitutional democracy that citizens established 22 years ago, after many years of division and conflict, was in serious crisis.

“President Zuma and his faction within the ANC are threatening the future of our democracy by seizing control of state institutions, primarily for the promotion of their own personal and political agendas.”

These included the National Prosecuting Authority, the Hawks, and branches of security establishments.

De Klerk alleged this “faction” was using these institutions to prosecute and intimidate opponents inside and outside the ANC.

They wanted control of the finance ministry and the treasury, the last obstacles in “their path of unfettered pursuit of personal and political goals”.

“Under this regime, the floodgates of corruption have been thrown wide open.”

Developments like these, and former finance minister Nhlanhla Nene’s dismissal, were pushing the country towards a ratings downgrade.

Asked if Zuma would “fall”, he said it was up to the ruling party.

“It is up to the ANC to decide whether the ANC itself or the country can any longer afford to have Mr Zuma in the presidency. They have the capacity to make a change and bring about new leadership.”