Brawl erupts in Parliament as EFF MPs are evicted

A brief brawl erupted between security and singing‚ defiant members of the EFF as they were dragged out of the National Assembly on Tuesday where President Jacob Zuma was due to answer questions. 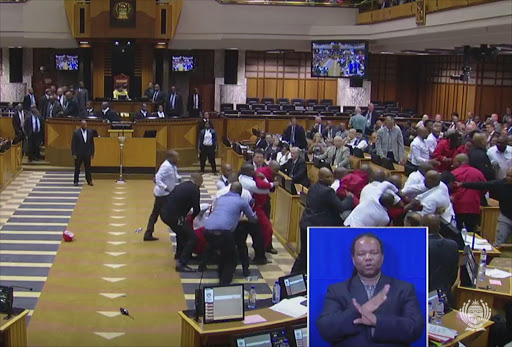 EFF MPs fight with security services who were ordered to throw them out of parliament.
Image: Screenshot via Youtube

Within minutes of proceedings getting underway‚ all decorum was thrown out of the window as the EFF went to war with speaker Baleka Mbete.

The EFF was adamant that Zuma‚ whom they describe as an “illegitimate president”‚ should not be allowed to address the chamber. Zuma smiled at the spectacle.

“We are asking you not to allow the president to speak here‚” said EFF leader Julius Malema‚ who insisted the president needed to be “rehabilitated”.

Mbete replied that she would not allow Malema to make any more speeches.

Parliamentary protection services members were pelted with objects as the gathered around the EFF members‚ who broke into song‚ and grabbed hold of them.

Some of the protesters were physically dragged out of the National Assembly.

There was harsh criticism from DA chief whip John Steenhuisen over the fact that parliamentary protection services officials were not wearing name badges and could not be identified.

Malema vowed outside of the National Assembly that there would be no “business as usual” in parliament until Zuma resigned. “Every time he comes here‚ the same thing will happen‚” he said.

Asked about the damage caused to the image of parliament‚ he said “we will do everything in our power to defend the Constitution”.

President Zuma has two clouds hanging over his head. He is awaiting a decision by the National Prosecuting Authority on whether or not to reinstate charges of fraud‚ racketeering and corruption.

The North Gauteng High Court set aside a 2009 decision by former acting national director of public prosecutions Mokotedi Mpshe – based on the contents of the so-called “spy tapes” - to withdraw the charges. He is also awaiting a decision by the Treasury on how much he should pay for the controversial upgrades to Nkandla‚ his home in KwaZulu-Natal.

The Constitutional Court ruled in March that the Treasury should determine "a reasonable percentage of the costs" to be paid by Zuma.

The EFF tried‚ but failed in the Western Cape High Court on Monday‚ to interdict speaker Baleka Mbete from removing their MP’s from the National Assembly.

Judge Ashley Binns-Ward struck off their application on the basis that it was not urgent.

Their defeat was welcomed by the ANC chief whip’s office which said: “There is no doubt that the EFF's urgent interdict was frivolous‚ as it essentially sought to ask the court to grant them the carte blanche right to disrupt (Tuesday) afternoon's sitting.”

EFF members were also physically removed by security after disrupting the Presidency budget vote debate earlier this month. They have labelled him as an “illegitimate president” after the Constitutional Court found that he had failed to defend‚ uphold and respect the Constitution over the way he handled the drama over his homestead‚ Nkandla.