DA the offspring of the National Party: Zuma 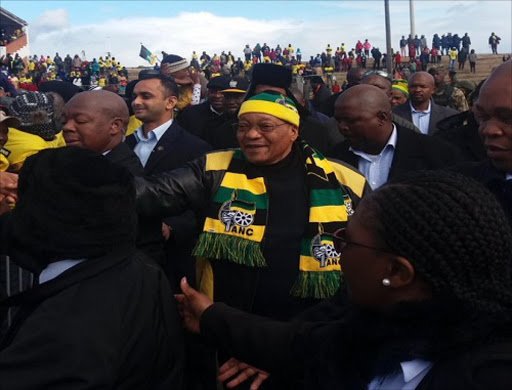 I am going to crush them and there is no speaker of parliament here to call me to order‚ President Jacob Zuma told thousands of ANC supporters in Nelson Mandela Bay in the Eastern Cape on Saturday.

A jovial Zuma lashed out at the DA‚ saying their roots were from the National Party (NP)‚ a party which he said represented apartheid and black oppression.

He likened the DA to the offspring of the NP‚ with the same anger and attitude toward black people.

"Every time they open their mouths‚ the first thing they say is ANC. Just like the National Party used to do.

"That's how a snake gets access to your house‚" Zuma said.

Zuma was speaking to thousands of Nelson Mandela Bay supporters‚ who braved the cold and wet weather at the Dan Qeqe Stadium.

Saturday's Siyanqoba mini rally was the ANC's last major gathering in the Bay ahead of what is likely to be the most hotly-contested local government elections on August 3.

The party's support has declined over the past two municipal and general elections. In 2014‚ the ANC received below 50% of votes in the Bay for the first time in two decades.

It hired 500 buses to transport residents from around the metro to show off its strength as it fights to keep control after the elections.

This was especially important after the national manifesto launch in April when the party battled to fill the Nelson Mandela Bay Stadium.

At the time it blamed the thousands of empty seats on a transport mix up.

Zuma said the ANC's support was improving in the metro and not declining as was reported in the media.

He also bashed economists and the media for reporting that the economy was deteriorating‚ saying the country was fine.

He urged residents to vote for the ANC‚ saying that the party was the only one with a struggle history.

"It's crystal clear that we are taking this metro. You saw the traditional leaders here praying. It means our ancestors are with us.

"It means that God and Jesus are with us. Then who can defeat us?

"Do not be confused by other people who know nothing about the struggle. We fought for this country because it's the ANC and its alliance that brought us freedom. We cannot forget that and vote for other parties‚" Zuma said.

He referred to DA leader Mmusi Maimane as a fake‚ saying he was just like the offspring of the NP claiming they will take the metro.

"I get shocked when I see our people wearing that T-shirt with that colour I'm not going to mention and I think to myself eish‚ hard times don't end."

"Oh‚ how I love these ladies with the doeks‚" Zuma said.

Nelson Mandela Bay mayoral candidate Danny Jordaan‚ who spoke before Zuma‚ said all struggle stalwarts had roots in the ANC and that the DA did not have a struggle hero or history.

"On August 3‚ we are going to turn the tide towards a decisive victory.

"If you are happy with what we did in a year‚ can you imagine what we can do in five years?" Jordaan said‚ as the crowd chanted "Danny‚ Danny‚ Danny".

Celebrities AKA and Minnie Dlamini attended the event.