EFF calls for coffin case farm to be occupied 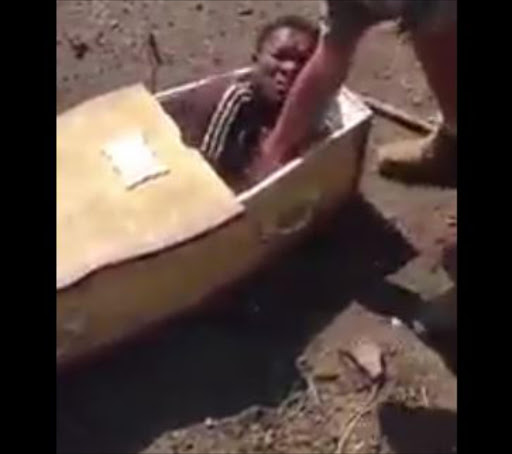 The Economic Freedom Fighters (EFF) called for the farm where a black man was allegedly assaulted and put in a coffin by two white farmers to be occupied.

The party’s secretary-general Godrich Gardee tweeted on Tuesday morning: “#coffinAlive We need a mass protest to the farm of the JM de Beer Broedery to do what he did to this black African & occupy it @afriforum”.

The mention of Afriforum is a dig at the organisation which laid charges against EFF leader Julius Malema and led to his appearance in a Bloemfontein court on Monday.

“This white racist in Middelburg should be made to undergo same experience‚” he added.

This white racist in Middelburg should be made to undergo same experience #coffinAlive JM De Beer Broederyhttp://bit.ly/efftoattendcourt https://t.co/uQVHiNF9ht

Gardee is likely to be among the EFF leadership which will be at the Middelburg Magistrate Court on Wednesday when Oosthuizen and Martins appear.

The party said in a statement on Monday that the pair “took a video and put it up on social media for amusement after humiliating” Victor Rethabile Mlotshwa.

“This humiliation can be based on nothing else but his blackness‚ which means it is in actual fact a humiliation of black people as a whole‚” the statement added. “The incident took place at JM De Beer Boerdery next to Komati Power Station. They are charged with kidnapping and assault with intend of grievous bodily harm.”

Malema on Monday used the incident to attack members of the clergy who were critical of his controversial statements‚ asking “where are statements from pastors and bishops condemning what white farmers did to this black man?”

The Bishop of Johannesburg Dr Steve Moreo had reprimanded Malema for his vitriolic attack on fellow white South Africans following a court appearance on charges under the Riotous Assemblies Act a week earlier in Newcastle.

“We are not calling for the slaughtering of white people – at least for now‚” Malema told supporters last Monday.

Such language‚ said Bishop Moreo in a statement published by the Anglican Communion News Service last Wednesday‚ had no place in a free democracy.

“Malema's vitriolic attack on his fellow white South Africans is sad and a stark reminder that the naked sin of racism is alive and well in South Africa. It is a reminder that racism is as damaging whether articulated by black or white and is no different to the corruption and greed of many in our country - all of which is decaying our land right now‚” he said.

“It is particularly shameful to see it manifest in a person such as Malema.”