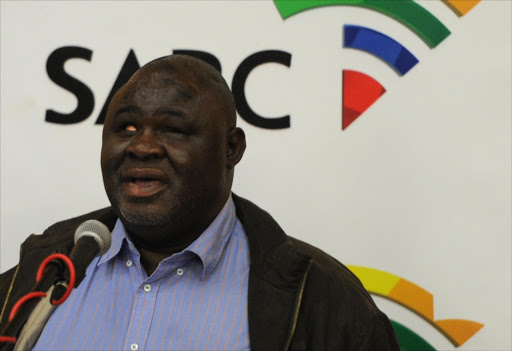 SABC board member and chairman Prof Mbulaheni Maguvhe‚ staged a walkout in the middle of the ad hoc committee meeting.
Image: Gallo Images

Lone SABC board member Professor Mbulaheni Maguvhe has taken his fight against parliament to the Western Cape High Court to interdict its investigation into the public broadcaster‚ just a day before it was meant to resume its inquiry.

In his last ditch effort to have the inquiry halted‚ Maguvhe states in court papers lodged with the Western Cape High Court on Monday that the ad hoc committee‚ chaired by ANC MP Vincent Smith‚ should be “reconstituted”.

But Maguvhe will have to wait a bit longer after the matter was postponed to Friday.

Maguvhe sought an order “directing that the ad hoc committee on the SABC is suspended and prohibited from continuing to perform the inquiry until the National Assembly has complied with order in paragraph three”.

The paragraph Maguvhe is referring to related to a summons sent to him to appear before the inquiry.

“On the basis of legal advice‚ I instructed my attorneys to address an urgent letter to the chairperson of the ad hoc committee to inform him of the difficulties with the summons‚” states Maguvhe.

He goes on to say that despite the “difficulties”‚ he was advised that it was “important to bring urgent proceedings in the honourable court for an order setting aside the summons”.

“If such an order is not sought and obtained‚ the ad hoc committee may‚ on the basis of my failure to comply with the summons‚ institute criminal proceedings against me‚ with very serious consequences for my freedom and dignity‚” says Maguvhe.

The ad hoc committee is supposed to begin on Tuesday and will continue for two weeks.

The committee's proposed witness list has up to 30 names‚ including former board members and former employees‚ including Minister of Communications Faith Muthambi.

Speaker Baleka Mbete is listed as the first respondent with secretary to parliament Gengezi Mgidlana as the second respondent.

Smith said he found the timing of the interdict “disconcerting that it happened in the last minute”.

“But what I can tell you is that the ad hoc committee meeting at 9am will continue. The actual inquiry only starts at 2pm. A decision on a way forward will be taken after the 9am meeting‚” said Smith.

Some of the listed respondents and those that Maguvhe wants “disqualified”‚ like the IFP’s Liezl van Merwe‚ are not even members of the communications portfolio committee.

Former CEOs Frans Matlala and Lulama Mokhobo are among those who will be called to give evidence at the parliamentary inquiry into the board’s fitness to hold office.

Phil Molefe and Jimmi Matthews‚ who are both former SABC heads of news and have also acted as CEOs‚ are also among the 30 witnesses that have been lined up by the ad hoc committee.

Smith confirmed that he was made aware of the application by Maguvhe on Sunday night at about 10pm. Smith said court papers were sent via email on Saturday.

“I‚ in consultation with the parliamentary legal team‚ decided that we will defend it‚” Smith said.

Smith said he was still to receive a briefing on Monday afternoon about the status of Maguvhe’s application.

The decision by the committee followed a marathon sitting dealing with the state broadcaster and its rapid decline in recent times.

The portfolio committee had summoned the SABC board to give an account of the controversial appointment of the former chief operations officer Hlaudi Motsoeneng as Group Executive: Corporate Affairs.

The committee also unanimously agreed that the incumbent board members should be requested to resign. Two resigned on that day.

Since that meeting‚ three other board members have resigned‚ leaving Maguvhe as the only board member.

Following his appearance before the portfolio committee in Parliament on October 5‚ Maguvhe held a media briefing the next day saying he had no intention of stepping down.

“Let the inquiry come. I am ready for it. So it means I am going nowhere‚” Maguvhe said.