A board of inquiry appointed to probe suspended national police commissioner Riah Phiyega fitness to hold office in the wake of the 2012 Marikana massacre in which 34 miners were killed during a protest for higher wages has reportedly found her unfit and has recommended that she be dismissed. 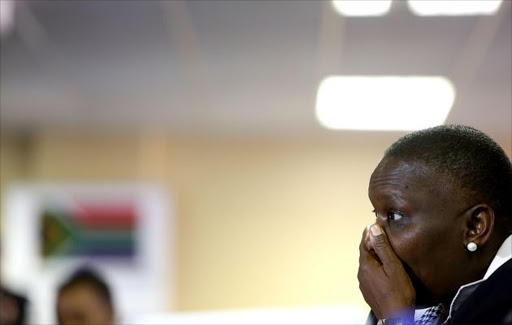 Riah Phiyega during closing arguments in the Claassen board of inquiry, probing her fitness for office.
Image: Sizwe Ndingane

City Press reported on Sunday that three sources with knowledge of the findings had told the newspaper that the board of inquiry‚ headed by Judge Cornelis Claassen‚ also found that Phiyega had lied to the Marikana Commission of Inquiry‚ headed by retired Judge Ian Farlam.

Phiyega is challenging the findings of the commission‚ the newspaper said.

It said the board found that Phiyega had failed to disclose that there were two crime scenes at which the 34 mine workers were gunned down in August 2012 – Scene 1‚ at which some of the mine workers were killed; and the infamous Scene 2‚ where police pursued and shot fleeing mine workers‚ many of whom were killed while hiding behind rocks.

The newspaper added that the findings have not been communicated to President Jacob Zuma because the presidency is yet to provide a date on which the board can brief him about its findings and recommendations. The inquiry concluded on June 3 and the report was finalised on November 13‚ it said.