Lawyers representing Marikana victims have called President Jacob Zuma's update on compensation “hollow”‚ adopting a wait-and-see approach as the same announcement was made last year but nothing came of it. 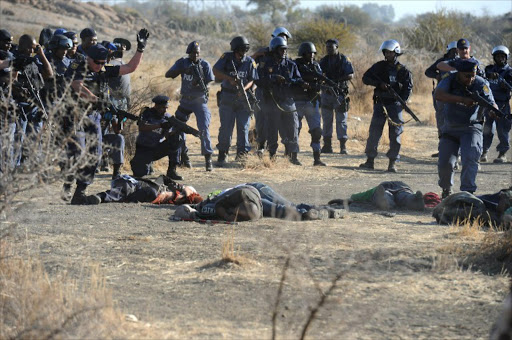 Police call for a ceasefire after killing 34 miners at Lonmin's Marikana mine on August 16, 2012 in this file photo.
Image: AFP PHOTO

He said‚ like always‚ the miners were not involved and get to know the decisions taken about them when they are announced in public.

"These are the people from who the whole tragedy played out. There must be consequences‚" he said.

The Presidency on Sunday issued an update on steps taken by government to implement the Farlam Commission of Inquiry’s recommendations.

Several senior police officials have been charged with murder or attempted murder‚ defeating the ends of justice and ignoring the advice of experienced public order police on crowd control.

Forty-four people‚ including 34 miners‚ were killed during a wage dispute at Lonmin mine in Marikana four years ago.

The Farlam Commission of Inquiry recommended that the National Prosecuting Authority (NPA) investigate and prosecute those who committed the killings.

NPA spokesperson Luvuyo Mfaku said the investigating team comprised of senior NPA prosecutors‚ led by acting special director of public prosecutions Tori Pretorius‚ has made recommendations on who should be prosecuted and for what.

“The decision to prosecute has not been taken‚ the team has made recommendations. The decision will be taken in conjunction with the director of public prosecutions in North West‚ where the incident occurred‚” he said.

Mfaku said as the year was winding down‚ the decision will probably be made in February.

Earlier this year‚ the government appointed an actuary to calculate all claims‚ most of which are loss of support claims from the deceased’s families.

About 275 unlawful arrest claims have been completed and are now ready for settlement‚ with only one claimant who has charges pending.

Personal injury claims have been delayed due to the victims’ attorney still considering to agree on one set of medical experts.

The Presidency says it is prepared to compensate the claims once all due processes have been completed.