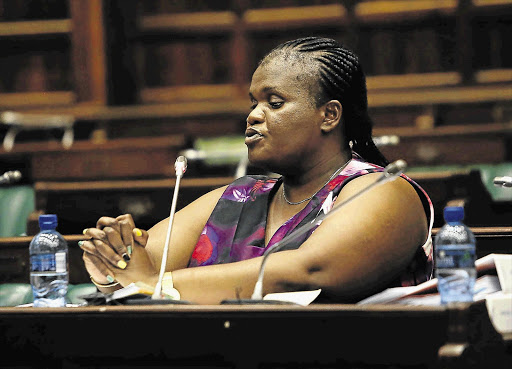 Communications Minister Faith Muthambi has been accused of misleading a parliamentary inquiry into the crisis at the SABC.

Muthambi appeared before the inquiry on Wednesday and denied that she had ever interfered in board matters or that she bullied the board into appointing Hlaudi Motsoeneng as permanent chief operating officer in 2014. The Broadcasting Act prevented her from interfering in board matters‚ the minister said.

"I have a strong feeling the minister misled us yesterday and misrepresented a lot of facts‚ and I think we will have to take action when the time comes‚" said Makhosi Khoza‚ an ANC MP and a member of the parliamentary ad hoc committee looking into the crisis at the public broadcaster.

ACDP MP Steve Swart‚ also a member of the committee‚ said evidence suggested Muthambi had interfered in board affairs and played a greater role in the appointment of Motsoeneng.

Some committee members also felt that board meeting minutes presented by the SABC to the committee earlier may have been doctored.

The members were reacting to testimony from former board member Rachel Kalidass.

She told the inquiry on Thursday that Muthambi "was too close to the action".

Kalidass presented minutes of a late-night board meeting which revealed that Muthambi had featured strongly in the decision to appoint Motsoeneng.

Kalidass said the minister had made it clear to the board during a late-night meeting in 2014 that Motsoeneng deserved to be appointed as he had acted in the position for too long.

Motsoeneng was appointed in 2014 despite a report by the public protector that found he had fabricated a matric qualification‚ purged those he disagreed with and irregularly increased his salary from R1.5 million to R2.4 million in one year. The public protector recommended that he be disciplined.

Kalidass said Muthambi and the board chairwoman at the time‚ Zandile Tshabalala‚ had referred to a legal opinion from Mchunu Attorneys that found Motsoeneng was not guilty of any wrongdoing.

"We were just told that Mchunu Attorneys had been appointed as advisers‚ but there was no board resolution [on the sourcing of a legal opinion or appointing the attorneys]. The board chairperson [Tshabalala] at the time acted like an executive chairperson‚" said Kalidass.

She said the board was divided on the resolution to appoint Motsoeneng.

In addition to the public protector report being ignored‚ Kalidass said concerns were raised that normal recruitment processes were not followed. The position was never advertised and no interviews took place. Muthambi had ignored these concerns.

She said most of the members who opposed the plan to appoint Motsoeneng were later purged. Muthambi had in one meeting said she felt the board was "too large"‚ said Kalidass.

She said that after Motsoeneng’s appointment‚ the board members who had refused to toe the line started receiving letters from Muthambi asking them to resign. Kalidass and two other board members‚ Ronnie Lubisi and Hope Zinde‚ were axed in 2015.

Kalidass maintained that the board decision to remove her and the other members was unlawful.

The Broadcasting Act‚ which governs the SABC‚ stipulates that board members can be removed only by the president as the appointing authority‚ and only after due inquiry is done.

Civil society groups including the SOS Support Public Broadcasting coalition and the Freedom of Expression Institute‚ have approached the High Court in Pretoria‚ challenging the dismissal of the board members.

Kalidass said Muthambi was aware that Motsoeneng was causing havoc at the SABC‚ but still supported him.

Motsoeneng has featured heavily in the inquiry. He has been largely blamed for the current crisis at the SABC.

He lost his job as SABC chief operating officer in September after the Supreme Court of Appeal dismissed his application for leave to appeal against a ruling by the High Court in Cape Town‚ setting aside his permanent appointment.

The SABC then announced that it had reappointed him to his previous post of group executive for corporate affairs. This precipitated the resignation of two board members in Parliament in October.

On Monday‚ the High Court in Cape Town ruled that Motsoeneng was not entitled to occupy any position at the SABC until the public protector’s 2014 report was set aside or new disciplinary processes against him were finalised.

The inquiry will continue in January.