The Hawks in KwaZulu-Natal have taken in four men for questioning in connection with the brutal murder of chief Linda Mathonsi (60) and attempted murder of his daughter‚ the police unit said on Tuesday. 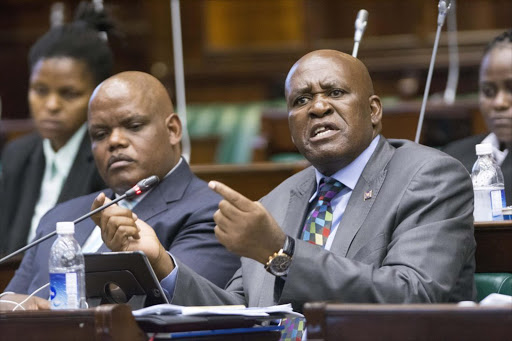 Mathonsi and his daughter were shot t by unknown suspects while they were driving at Chappies area in Mandeni on Monday‚ 5 December 2016. The chief died at the scene. His daughter was taken to hospital for medical attention.

The suspects fled the scene in a getaway vehicle.

"The case docket was transferred Hawks for intensive investigation and on Tuesday‚ 20 December 2016‚ the four were apprehended‚" said Brigadier Hangwani Mulaudzi. One of the men was found in possession of a firearm.

"The firearm was seized and will be sent for ballistic testing to establish if it was used in the commission of crime‚" said Mulaudzi.

The motive for the attack is as yet unclear but the Inkatha Freedom Party‚ African National Congress and South African Communist Party have expressed concern at the spate of killings in the province.

Two IFP leaders - Simo Ndlovu (37)‚ IFP Chairperson of the Mambuka Branch in Ward 33 at Umhlatuze and Lungisani Sithole (27)‚ who was the Youth Publicity Secretary of Ndondwane Branch in Ward 32 - were killed at the weekend.

Blessed Gwala‚ IFP National Chairman and KwaZulu-Natal spokesperson on Community Safety and Liaison‚ said: "These two killings come so soon after the brutal assassination of Inkosi Linda Mathonsi. I have made a request for the police to offer a reward to anyone who has information that will lead to the arrest and conviction of these killers. We cannot go on living in an environment where such lawlessness prevails and innocent citizens become random targets for killers who go unpunished."

The ANC‚ commenting after Mbhekiseni “Pat” Khumalo‚ 57‚ a ward 7 councillor in uPhongolo‚ northern KZN‚ was gunned down at his home at the weekend‚ said it wants the law to come down hard on the people behind the attacks.

He was the third ANC councillor to be murdered in the last five weeks.

KZN ANC secretary Super Zuma said: “We don’t know what the motives are. We want those who pulled the trigger‚ yes‚ but we’re more interested in who is planning this".

The SACP said on Tuesday its provincial leadership met with branches this week to discuss "ongoing assassination suffered by SACP members and leaders in the community".

"The meeting concluded by calling for a restraint and calmness under these difficult conditions and concentrating on uniting the community and exposing the criminal elements."