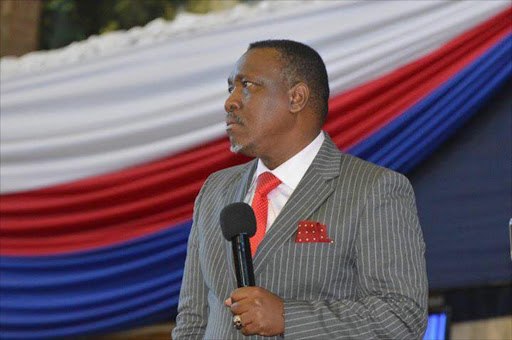 Church leaders have lashed out at government over its proposed hate speech legislation‚ saying it will stop preachers from speaking freely.

Representatives from Christian‚ Rastafarian‚ Muslim and Jewish faiths met with the departments of Justice and Constitutional Development and Social Development on Monday to discuss the Hate Crimes and Hate Speech Bill and proposed regulations to stop the commercialisations of religion.

A presentation by Deputy Justice Minister John Jeffrey at the meeting being held at the Turfontein race course caused a stir‚ with several religious leaders saying government should not interfere with the church.

"I don't think it is fair for the bill to restrict us in our preaching‚" said Bishop Petrus Jabulani Bhuti Mashinini‚ of the Kopano ya Mapostola Churches Association.

Chairperson of young religious leaders forum‚ Neo Tyati said “most South Africans do not know anything regarding the Constitution‚” and called on government to provide education on its contents.

“The media blows things done at churches out of proportion‚” he said.

The meeting came as a storm raged over a sermon conducted at the Grace Bible Church in Johannesburg.

Prominent TV personality‚ dancer and actor Somizi Mhlongo walked out of the service this Sunday‚ saying its content was homophobic.

Those attending the workshop appeared unfazed by the controversy‚ instead demanding government roll back their efforts to curb hate speech.

"I encourage the government to build more prisons‚ we are coming for you. I do not believe what you are saying: can you promise that all of us here will not be jailed as a result of this bill? Your definition of hate speech and what it might be religiously are two distinct things‚” said Archbishop Bafana Zondo of the Rivers of Living Water Ministries International.

Others demanded government allow them to speak their minds on same sex relationships.

"Christians are against homosexuality‚ and will not accept this bill since it seeks to protect it‚" said Evangelist Freddie van Rensburg of the Global Christian Movement.

The hate speech bill seeks to provide stiffer punishment for those guilty of hate crimes and hate speech.

In trying to clarify the matter‚ Jeffery‚ said: "The bill will criminalise preaching against homosexuality‚ racial discrimination and so forth. But it does not intend to criminalise the Bible‚ Quran or infringe the rights of people to practice their religious beliefs. The bill is not about religion but seeks to encourage tolerance. We do not want to censor the teachings of preachers."

The meeting will also discuss plans to prevent the commercialisation of religion. A number of churches have made headlines recently for strange religious practices‚ including the use of Doom as a miracle cure.