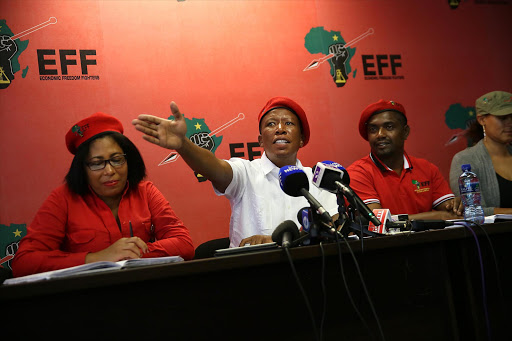 EFF leader Julius Malema addresses the media on the 3rd Plenum of the EFF at a media briefing at the EFF’s headquarters on 23 January 2016.
Image: ALON SKUY/THE TIMES

The South African Politician Awards must be an inspiration for “lazy MPs”.

This is according to businessman Lloyd Ngavu‚ the man behind the first annual SAPAs‚ taking place in Cape Town on February 8. Ngavu said he got the idea for the awards after noticing the pageantry at the annual openings of Parliament and the State of the Nation Address each year.

“I started with the concept from 2014‚ after the national elections. I managed to meet a few people who were interested in supporting [the concept]. It’s a huge event‚ so it needed financial backing‚” he told The Times on Tuesday.

With everything in place‚ and the 250-seat event already sold out‚ Ngavu hopes that the awards will be a carrot dangled in front of politicians to force them to do better.

EFF leader Julius Malema earlier on Tuesday said that he and his party had turned down nomination‚ saying that the awards were nothing more than “personal glorification”.

“We told them we cannot be involved in this. Politicians must not be awarded for doing their jobs‚” he said.

But Ngavu would not weigh in on this.

“That is their own opinion‚” he said.

Instead‚ he defended the SAPAs‚ saying that handing out awards was done in much the same way that companies would reward employees who went beyond the call of duty.

“Irrespective of what is happening in parliament…there are those members who are going the extra mile to help communities live a better live. This must be an inspiration to lazy MPs. [It’s a message] that communities won’t recognise you if you’re not giving them service delivery‚” said Ngavu.

Full list of nominees (as provided by event organisers):

Best Parliamentarian of the Year:

Debater of the Year

Committee MP of the Year

E-Politician of the Year Award

Public Campaigner of the Year

Best Executive Mayor of the Year

Best Political Party of the Year

South African Politician of the Year

Political Analyst of the Year Award

Best Premier of the Year Awards

Best Minister of the Year Award

Citizen’s Choice of the Year Award