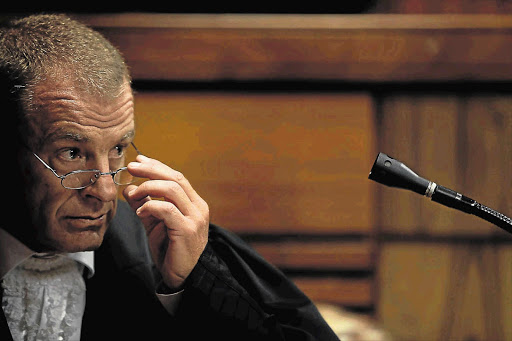 Veteran prosecutor Gerrie Nel has explained his decision to leave the NPA and enter the realm of private prosecution‚ saying his unit won’t only go after political high flyers.

"Anyone who is allegedly involved in corruption‚ regardless of their standing in society‚ whether they are a public figure or not‚ will be prosecuted by us if they are not prosecuted by the NPA‚ especially if they meet the criteria for prosecution.

"This not just about political prosecutions. It is about ensuring corruption is stopped and people are held to account‚" he said.

Nel‚ who put Paralympian Oscar Pistorius behind bars‚ was speaking at the media conference in Pretoria where he explained his move to a new private prosecution hub within Afriforum.

The Afrikaans lobby group is no stranger to the courts‚ having fought several cases involving affirmative action and university language policies‚ but this unit’s work would be a departure from Afriforum’s usual civil litigation focus.

Nel said the decision was not one that had been taken lightly or instantly.

"There have been discussions on it for more than a year. This has been a long time coming‚" he said.

While simultaneously pledging faith in the justice system‚ Nel said the decision to leave the NPA "has nothing to do with politics".

"It is about a challenge‚ which I could not refuse‚ and about delivering justice to the people of South Africa.

"My vision for this team is to assist the country's justice system. I have 100% faith in those I have left behind at the NPA and South Africa's criminal justice system‚" he said.

He denied any disagreements with NPA head Shaun Abrahams‚ whose office would ultimately authorise the Afriforum team’s prosecution.

Talking logistics‚ Nel said that once a decision had been made and a certificate to prosecute obtained from the NPA‚ the team would have three months within in which to begin the prosecution.

Nel would not be drawn into who was first on their "target list" or whether President Jacob Zuma would be the number one target.

However it seems Zuma could be in the lobby group’s sights as Afriforum CEO Kallie Kriel earlier said Nel’s appointment would "send a clear message to corrupt politicians and officials on national‚ provincial and local government levels that they can no longer be indemnified from prosecution due to their political contacts".

"Corrupt persons must realise that no-one is above the law‚ not even the country’s president‚” Kriel said.

NPA head Advocate Shaun Abrahams has yet to pronounce on a Pretoria High Court order delivered last year that the 783 corruption charges against the president be reinstated.

Nel said that the idea behind the team was not to run a parallel justice system.

Nel gave one day’s notice and will begin work at Afriforum on Wednesday.