Glynnis Breytenbach's arch nemesis not keen to be questioned in court

Prosecutors in the trial of Glynnis Breytenbach fought hard to keep her arch nemesis - disgraced deputy director of public prosecutions Advocate Nomgcobo Jiba - out of the dock on Wednesday. 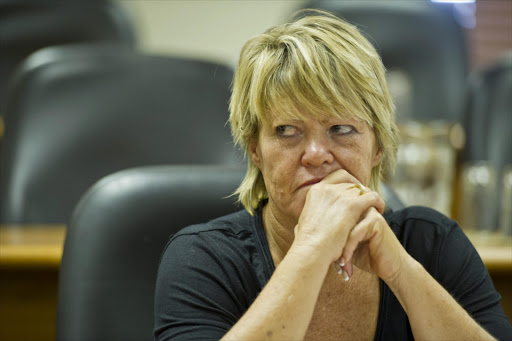 Breytenbach‚ a former prosecutor who joined the DA‚ is on trial with her former lawyer Gerhard Wagenaar in the Pretoria North Magistrate’s Court for defeating the ends of justice and contravening the National Prosecuting Act.

Jiba‚ one of the National Prosecuting Authority's four deputy heads‚ was found by the Pretoria High Court in 2016 to be unfit to practice and a disgrace to the country's legal profession.

Breytenbach and Wagenaar are accused of tampering with and deleting documents from her work laptop in 2012 while she was employed by the National Prosecuting Authority.

Breytenbach was investigated by the Hawks for allegedly committing fraud while she was the head of the NPA's specialised commercial crimes section. Those allegations relate to her having apparently destroyed evidence in several cases.

She was also the subject of an internal investigation when she was alleged to have tampered with her state laptop computer to prevent evidence from being recovered.

The internal investigation was into her alleged improper conduct while prosecuting a mining rights case.

At the time of her suspension‚ Breytenbach was pursuing an investigation into disgraced former police crime intelligence boss Richard Mdluli.

It was speculated at the time that the prosecution of Mdluli led to her being suspended by Jiba and internally investigated.

State prosecutor Raymond Mathenjwa said it would not be in the interest of justice for Jiba to appear in court.

Breytenbach alleges that Jiba stopped the prosecution of Mdluli for ulterior purposes. "The ulterior allegations are not true‚" argued Mathenjwa.

He said the inferences‚ which went back to 2012‚ had never been proved.

"Why do they want her [Jiba] in the stand. All she will say is what has already been said by witnesses.

"They have raised issue with the letter of suspension authored by Jiba‚ from when she signed it [2 April 2012] to when Breytenbach was suspended [23 April 2012] and the time frame but that has nothing to do with this case‚” he said.

"The decision by management on when to suspend is up to management. This case has to do with nothing else but the charges the accused face. That’s it.

"Rather than Jiba having ulterior motives it is rather the defence‚ who claim they want to question her on her authority to sign the suspension letter‚ who have ulterior motives for wanting her in the stand."

He said the accused’s lawyer‚ Advocate Barry Roux‚ had asked him recently to tell him when Jiba would be called to the stand because there were people who wanted to attend court then.

"When I enquired whether these people had an interest in the case he said no. That to me points to an ulterior motive."

He asked why he should allow Jiba to be cross examined with obvious "zeal".

"To have her testify will create the wrong perception. She had the authority‚ because of her position‚ to sign such letters‚" said Mathenjwa.