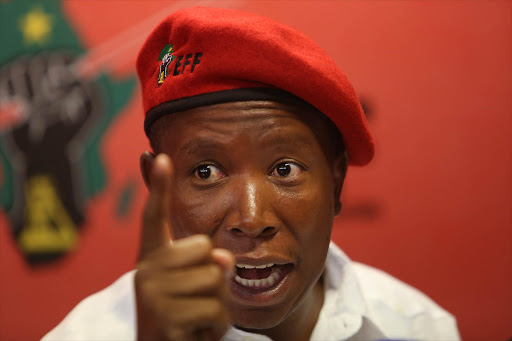 "The Absa nonsense is not legit and I will not be told by opposition of the EFF on how to act‚" EFF leader Julius Malema said.
Image: ALON SKUY/THE TIMES

The party's acting provincial chairperson‚ Mandisa Mashego‚ on Thursday accused the former MEC for Health in Gauteng of being hard-headed.

"Qedani Mahlangu historically does not listen. She was told repeatedly not to shut down that facility (Life Esidimeni) and she came back and arrogantly told the executive committee and the entire house during various sittings that government is ready. So in fact‚ she has misled the entire citizenry of Gauteng and all the voters and taxpayers of this province‚" said Mashego.

Mashego made the statement soon after it was revealed that the EFF had opened a murder case against Mahlangu‚ Premier David Makhura and the entire Gauteng cabinet.

The EFF wants the province’s executive committee to step down.

The party also wants the non-governmental organisations fingered in the death of 94 mentally ill patients in the province and anybody else that may have played an indirect role leading to the death of the patients to be held accountable.

On Wednesday‚ the country heard how the department was directly responsible for the death of 94 psychiatric patients in a damning report by Health Ombudsman Malegapuru Makgoba that sent shock waves across the country.

This was in contrast to a figure of 36 fatalities given by Mahlangu in the provincial legislature in 2016.

The victims died between March and December 2016 after 1‚300 patients were moved from the department’s contractor‚ Life Esidimeni‚ to several non-government organisations in Gauteng.

Mahlangu has since resigned as MEC and will be succeeded by Dr Gwen Ramokgopa‚ an ex Deputy Health Minister and former Health MEC.