Fire Ramaphosa and Mthethwa and not just Phiyega over Marikana 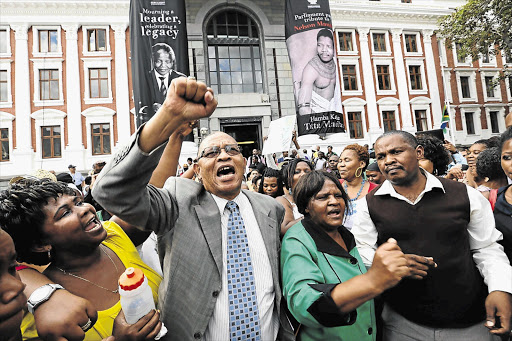 Deputy President Cyril Ramaphosa and Police Minister Nathi Mthethwa should be fired and criminally charged for the massacre of 34 mine workers at Marikana in 2012‚ Congress of the People says.

“If Mr Jacob Zuma and his government are serious about putting the painful event of Marikana to rest‚ then‚ Zuma must be honest and not shield or cover up for his close comrades‚ the Deputy President Cyril Ramaphosa and Minister Nathi Mthethwa‚” COPE spokesman Dennis Bloem said on Saturday.

“Now that the Claasen Commission report recommends that Police National Commissioner Riah Phiyega be fired‚ we strongly believe that Ramaphosa and Mthethwa are the first to be fired for their involvement in the massacre‚” he added.

Bloem said COPE was “eagerly looking forward to the day when Phiyega will have her day in court to defend herself and tell the country who gave the police instructions to use live ammunition and kill the 34 miners”.

“We are well aware that Mthethwa was in constant contact with Phiyega before the action because of the volatility of the situation. It is absolutely wrong and unacceptable to throw the blame on one person. “Ramaphosa cannot deny the fact that he and Mthethwa were in contact in the days leading up to the massacre.

We are convinced that these discussions must indeed [have] had some bearing on the decision that was taken to employ live ammunition. “COPE believes that the truth can never be concealed‚ sooner or later the country will know the truth. We want to reiterate that Zuma and his government must not use Phiyega as a scapegoat.

“Mthethwa and Ramaphosa must also be fired from their positions and be criminally charged for the massacre of the 34 mine workers at Marikana‚” Bloem stated.