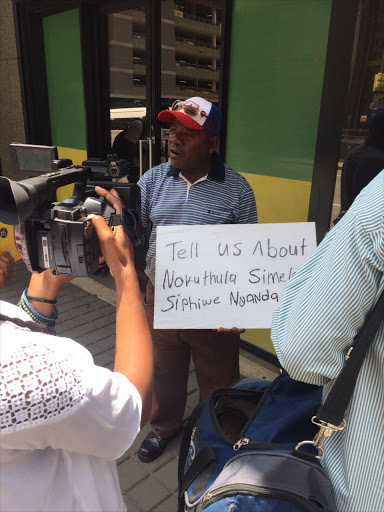 An uMkhonto WeSizwe veteran on Monday called on his former general‚ Siphiwe Nyanda‚ to divulge his part in the disappearance of Nokuthula Simelane.

The activist disappeared in 1983 while on a mission to the Carlton Centre in Johannesburg.

“During that time‚ people were paid by the apartheid regime and that is why they are rich today. They were paid. We went to Robben Island because they were paid. Who sold out this woman?” said Kid Sogovu.

He ambushed Nyanda during a media conference held at Luthuli House.

Wearing a cap‚ the short chubby man who had a placard hung around his neck was dragged out of the news conference by security officers after he disrupted the proceedings‚ seeking answers from Nyanda.

His placard read: “Tell us about Nokuthula Simelane‚ Siphiwe Nyanda.”

The MKVA and the MK National Council had called the conference to brief the media on their meeting held last week in Sandton.

Sogovu accused Nyanda on focusing on problems in the ruling party instead of first addressing the military veterans’ issues.

“He has never called any conference about our fight‚ fighting against apartheid‚ but he can call a press conference and talk about other things which don’t need him‚” Sogovu told reporters outside Luthuli House.

Sogovu claimed he had landed in jail during the apartheid era after following a false lead by Nyanda.

“I committed acts of sabotage in 1982 with other comrades and we went back and reported to [Nyanda] in Swaziland. From Swaziland we went to Mozambique.

“Then in 1983‚ he sent us back again to come and commit further acts of sabotage as members of MK and that is when I was arrested‚” he said.

Sogovu said Nyanda had sent him and other freedom fighters to meet with a contact but they were instead met by security officers.

He has not received an explanation from Nyanda on how they were arrested.

Questioned on whether he had been planted to disrupt the meeting‚ Sogovu dismissed the claims.

“No‚ I am a former freedom fighter‚” said Sogovu.

He vowed to attend every meeting where Nyanda would be present to press him for answers.

Simelane was a 23-year-old university graduate when she disappeared.

She was a courier for UMkhonto we Sizwe (MK)‚ the armed wing of the African National Congress‚ moving between Swaziland and South Africa.

Reports suggest that she fell into a trap set by one of her own and was allegedly abducted and brutally tortured by the Security Branch of the former South African Police. She was never seen again.