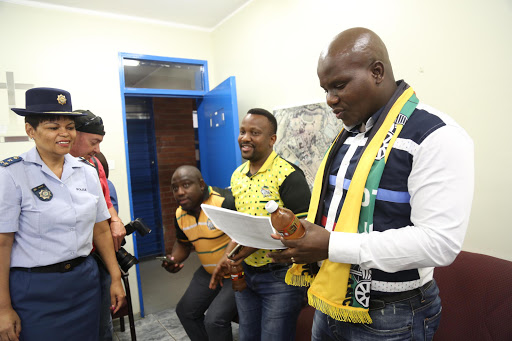 Buoyed by recent successes of opening cases of crimen injuria against Penny Sparrow‚ Andre Slade and Dawie Kriel‚ all of whom they accused of racism‚ the ANC descended on the Mountain Rise Police Station in Pietermaritzburg on Wednesday morning to charge the DA Pietermaritzburg constituency head and MP.

In a 10-minute recorded WhatsApp call conversation‚ currently doing the rounds on the social networks‚ a man believed to be Chetty can be heard chatting to former DA councillor Lungisani Sikhakhane exchanging pleasantries and hearty laughter.

Sikhakhane defected from the DA to the ANC before the recent local government elections and was unveiled as an ANC member during a rally at Harry Gwala Stadium in June last year.

In the recording Chetty says he called Sikhakhane to thank him for the posting and greetings‚ presumably for the New Year.

He then reveals his fondness of him saying that‚ despite politics‚ they should still be friends. It was during this exchange that Chetty allegedly used the xenophobic slur.

“I called you because I wanted to thank you for the posting and greeting…its good…there is life after politics. We cannot become like f***king makwerekwere and fight over our f***king stupid things‚” he says in the recording.

Although said casually‚ the ANC was not amused by the National Council of Provinces MP’s remarks. The party believes Chetty should be taken to task.

KwaZulu-Natal ANC spokesman Mdumiseni Ntuli‚ who is also a member of the party's powerful provincial executive committee‚ said they remained resolute in their campaign of continuing to build a non-racial and united country by isolating racists that are hell-bent on dividing communities.

“The reason why we are opening the case is because we come from the African National Congress which was founded on the basis that we must fight against oppression and discrimination of any kind. Now Mr Chetty’s conduct and the articulation that’s been widely circulated in the media sought to undermine the constitutional values of our country which we have a responsibility as a governing party and liberation movement to defend.

"We took it upon ourselves as the provincial executive committee to take the matter before the law. That’s why we have come to open a case because we must pursue and oppose this agenda using the legal avenues which are supported by the democratic dispensation which we fought for as a country. For that is a reason Comrades we thank you for turning up‚" said Ntuli.

Both Chetty and Sikhakhane could not be reached for comment.

DA provincial leader Zwakele Mncwango said earlier in the week that it was wrong of public representatives to use such language‚ but questioned the timing of the release of the clip.

“From what I am hearing‚ this clip is old. Why release it now? Is it because there is a by-election in Woodlands? They are trying to dent the image of the DA and that of Mergan Chetty‚” he said.