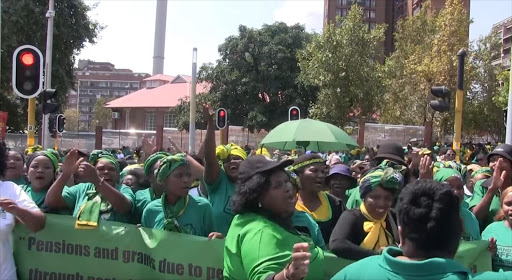 The Women's League sang their love for Minister of Social Development Bathabile Dlamini on 15 March 2017.
Image: TMG Digital via YouTube

Minister of Social Development Bathabile Dlamini may not be getting much love in the Constitutional Court, but members of the ANC Women’s League (ANCWL) were singing their support for her outside.

The country is currently facing a crisis with regards to social grants. More than three years ago the Constitutional Court declared South African Social Security Agency's (Sassa) contract with Cash Paymaster Services to be invalid.

In November 2015 the Constitutional Court was assured that as of April this year Sassa would be able to handle distributing social grants itself, with no new contract necessary.

However it emerged that Sassa knew it couldn't do this in April of 2016, and that Dlamini knew about this in October.

“I genuinely want to understand… How do you get to the level where [your clients] make themselves look like they are incompetent? How did we get to this level that can be characterised as absolute incompetence?” Chief Justice Mogoeng Mogoeng asked Andrew Breitenbach SC, Dlamini's representative at the Constitutional Court on Wednesday.

Breitenbach was forced to admit during the proceedings that he couldn't explain why Dlamini didn't do her job.

The ANCWL meanwhile has rallied in support of the minister outside the court, saying, "Hands off our leader."

Vuyelwa Mlenga told TimesLIVE that the league was there to support Dlamini, and that they would get social grants.

"There is no way we won't get it. We have hope we will get it, because they deliver everything they promise us," Mlenga said.