How the youth remember Uncle Kathy 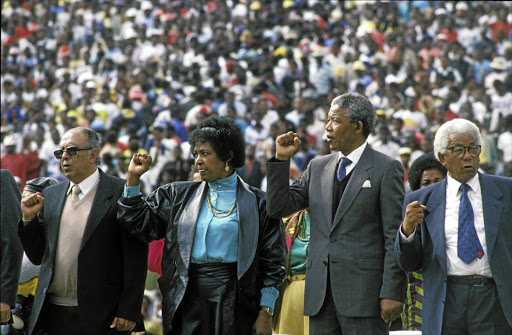 As South Africa woke up to the news of the passing of Ahmed Kathrada‚ the youth turned to social media to share how they remembered the struggle icon.

@Courtz_RM tweeted: “This one day at a Fees Must Fall protest‚ a student came up to uncle Kathy and said ‘thank you for what you have done for the country.’

Let us NEVER forget that when students called, #UncleKathy answered, attending protests and showing his support for the movement ❤

“Uncle Kathy took that student’s hands in his and said ‘no‚ thank you for what you are doing.”

Kathrada was supportive of the students’ calls for free tertiary education.

During the protests last year‚ he said he understood and sympathised with them but called for their patience‚ adding that democracy was a work in progress.

Kathrada died at the Donald Gordon Hospital in Johannesburg shortly at 03.45am on Tuesday morning.

I remember taking these pictures during #FeesMustFall last year. #UncleKathy remained with us when most did not. Long live his spirit! pic.twitter.com/jNS0HU02Rf

He had been ill for the last month‚ with his condition deteriorating in the last 24 hours. Kathrada was taken in for surgery linked to blood clotting on the brain.