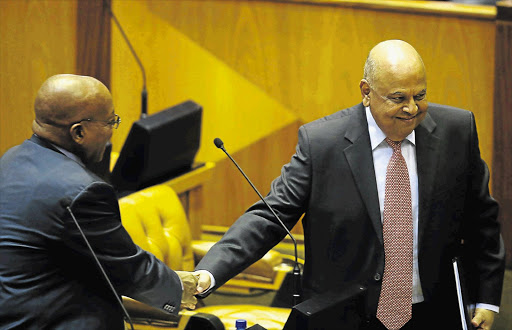 This is why he unilaterally called Gordhan from London and stopped deputy finance minister Mcebisi Jonas from going to the United States to meet with investors.

TimesLIVE has reliably learnt that Zuma acted on an intelligence report that claimed Gordhan and his deputy were to use the investor roadshow to mobilise prominent people in London and the US to act against the state.

Sources say Zuma told this to the top six ANC leadership on Monday evening after he had already instructed Gordhan to return and the mission of government officials‚ businessmen and labour representatives to abort the week-long activities.

Gordhan travelled with business leaders and trade unionists in an attempt to reassure investors and rating agencies about South Africa’s commitment to growing the economy and fiscal policy.

TimesLIVE understands that Zuma told the ANC leaders that Gordhan had to be removed as a result of him meeting with groups hell-bent on overthrowing the government.

This is not the first time Zuma used a purported intelligence report in defending his actions. Sources say the intelligence report‚ whose origin could not be verified‚ states that Gordhan would have told bankers in London to stand with Treasury in their fights against the presidency and the powerful Gupta family‚ who are close associates of the president.

State security spokesperson Brian Dube said he had no knowledge of any intelligence report on Gordhan.

There has been some pushback by ANC leaders against Zuma’s moves to fire Gordhan‚ but sources say he has insisted that he has the prerogative to fire a minister.

Zuma suggested that the relationship between Gordhan and him was irreparable and the president could not trust him.

Gordhan attended the funeral of struggle veteran Ahmed Kathrada and when asked about his possible removal‚ he said: "If one is told services are not required any longer‚ that is the end of one chapter and the opening of a new chapter. We go on asking the question‚ how can I continue contributing to a better South Africa?"