Ramaphosa speaks out on #cabinetreshuffle: Firing of Gordhan 'unacceptable' 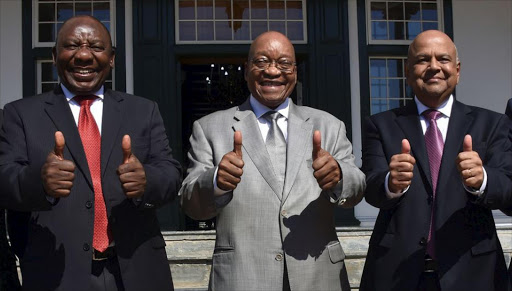 Deputy President Cyril Ramaphosa has broken his silence and spoken out against President Jacob Zuma's decision to fire Pravin Gordhan.

Ramaphosa and ANC secretary general Gwede Mantashe opposed the decision when it was presented to them at a meeting of the ANC's top six last night.

Enca quoted him saying it was "unacceptable" that Gordhan and his deputy Mcebisi Jonas had been fired.

The presidency officially announced a reworked Cabinet after midnight‚ following months of speculation.

Gordhan was replaced by Malusi Gigaba‚ formerly the Minister of Home Affairs. Jonas is being replaced by Sfiso Buthelezi‚ who joined Parliament in March 2016.

Zuma stepped back from his initial pick for finance minister at the request of his top five colleagues in the ANC — his initial choice was former Eskom boss Brian Molefe.

Ramaphosa cited the use of an 'intelligence report' purporting to prove that the two were using their platform to mobilise against Zuma.

Ramaphosa said Zuma had not properly consulted the ANC's leadership.

"The president has effected his Cabinet reshuffle. Before doing so‚ he met ANC officials. It was just a process of informing us of his decision‚" Ramaphosa said on SABC TV news.

"It was not a consultation because he came with a ready-made list. I raised my concern and objection on the removal of the Minister of Finance‚ largely because he was being removed based on an intelligence report that I believe had unsubstantiated allegations about the Minister of Finance and his deputy going to London to mobilise financial markets against our country."

He said this reminded him of when he had been smeared by a fake intelligence report by President Thabo Mbeki.

"That I find totally‚ totally unacceptable‚ that a person who has served our country with such distinction would do something like that. It reminded me of my own situation in 2001‚ when there was an intelligence report that I was involved in a plot to remove then President Mbeki … It disturbed me greatly…

"I went to Nelson Mandela‚ who said‚ don’t panic‚ I will handle this matter.

"It was preposterous. Similarly‚ my strong objection to the removal of the Minister of Finance and his deputy is being based on spurious allegations… I told the president so… I told him that this I would articulate publicly. This is where we are … He has made his choice. The president has the prerogative to appoint ministers."

Asked if he would resign‚ Ramaphosa said: "No‚ I will not. I’m staying to serve our people in government. I’ve made my views known. There are quite a number of other colleagues unhappy about this situation."

Mantashe also said he was unhappy with reshuffle‚ saying the party's top leaders gave no input to the list of replacement Cabinet members.

Speaking to Xolani Gwala‚ Mantashe was clearly unhappy with Zuma's decision to reshuffle his Cabinet and in particular the decision to remove Gordhan as finance minister.

"They [finance ministers] always come out to be good ... but the process has made me jittery and uncomfortable. The president knows the ANC is not happy with the changes‚" he said.

The JSE’sbanks had R86bnof their market capitalisation wiped out on Friday morning as the market reacted to Gordhan and Jonas's dismissal.