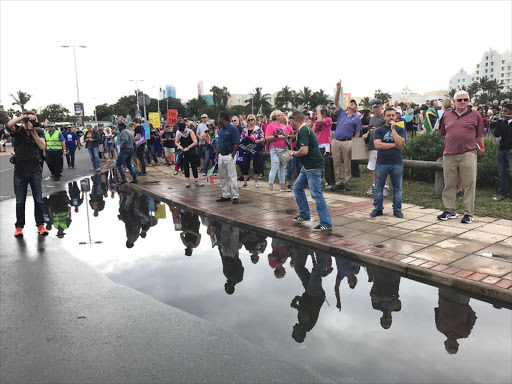 A list of hilarious protest tips was published on the Loud Mouth Chick blog ahead of several protests planned for Friday.

The list‚ compiled by lawyer Tracey Nixon-Lomax‚ has been copied and shared via Facebook and Whatsapp several times.

Author and lawyer Nixon-Lomax, speaking on Cape Talk radio on Friday morning‚ said the piece was satirical but contained valid advice that she has given to clients before.

“The reason for it is that I’d been quite astounded by some of the comments I’ve seen from people who plan to protest. There are an awful lot of people who think this is going to be like a Sunday school picnic‚” she said.

“I think a lot of average middle class white South Africans have no idea what happens at a protest. What is likely to happen if things go south‚ so I wanted to prepare them for that aswell. And there was a little bit of taking the Mickey.”

There is some solid – and hilarious – advice on the etiquette of protest marches.

Here is the list. Share your thoughts with us on Facebook. Friday’s protest is going to be horribly middle class‚ so let me give you a lecture in Protest 101.

1. Wear Sneakers and socks. You’ll need to move fast when the Nyalas arrive.

3. One among your number needs to mix up Rennies and water in a bottle – for the aforesaid pepper spray and tear gas. A quick squirt into each eye and you’ll be ready to toyi toyi to another rousing rendition of Shosholoza.

4. Wear a bandana – it will hide your face from SAPS spies who will be among the marchers. It also helps against tear gas.

5. Do NOT wear any outfit which looks military. It’s like catnip for the TRT and you’ll be whipped off in a van faster than you can say “but it’s Gucci”.

6. Do NOT sing kumbaya. Go onto YouTube and do searches for Fees Must Fall or other struggle songs. Shosholoza is not a struggle song. And we don’t hold up lighters for Senzeni Na.

7. If you’re going to drink bottled water‚ it should be decanted into other bottles. No woolies‚ Evian or Perrier‚ darling.

8. No‚ you don’t get extra creds for bringing your helper or gardener. You will get extra Creds for giving them the day off. How they choose to spend it is up to them. 9. Carry proof of residence and ID with you. Without it‚ you won’t get bail. Yes‚ the police are required to RICA you.

10. Go onto the Right to Protest website and save their phone number in case you’re arrested. Have it on speed dial.

11. Berets aren’t a fashion statement. Unless you share the politics of the party‚ don’t wear one.

12. Please‚ no Madiba shirts. If you must wear a politician’s face on your chest‚ try Biko‚ Hani‚ Sankara‚ Guevara. Go‚ now‚ and learn who they are.

13. By the same token‚ quote them and not Madiba.

14. If you see anyone in an EFF beret or PAC regalia run‚ get out of there. Those guys are tough AF‚ if they’re running‚ shit is about to go down.

15 Please don’t tell your children to “listen to the nice officer”. The correct advice is “don’t upset the lapdog of the ruling hegemony”.

16. protest speeches start with shouts of “Amandla” and fists flung skyward. Go with it. The louder the better. Just not kumbaya! Listen to the shouts around you. Do not ask anyone what they mean.

17. attending this protest should be the start of your journey towards enlightenment. Not the pinnacle of it. For the love of glop‚ don’t brag about it to the black people at the gym!

18. The people in the crowd taking videos and pics are probably NOT uploading them to IG‚ they’re going in a nice file which will be kept at SAPS and titled “naughty white people who don’t like uBaba”.

“There is a bit of backlash from my blog…My attitude is that black people have been stereotyped for years‚” Nixon-Lomax said‚ speaking to Timeslive.