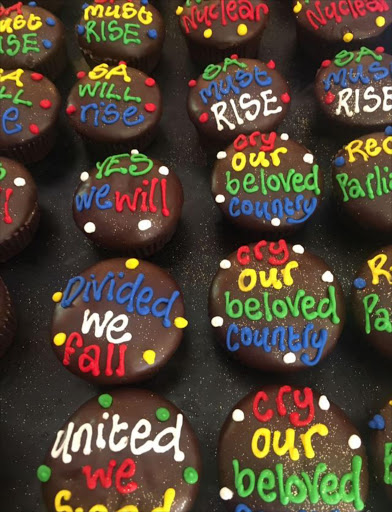 An army marches on its stomach and when protesters marching to Parliament unwrapped their “rations” in Cape Town on Friday they turned out to be – cupcakes.

Cupcakes decorated with political slogans proved to be a popular snack among many in the crowd waving posters‚ banners and flags.

Charly’s Bakery makes hundreds of cupcakes every day‚ and since Thursday night‚ the bakers have been creating specialty cupcakes in response to the protests against President Jacob Zuma.

Cupcakes were decorated with slogans such as “Recall Parliament”‚ “SA Must Rise”‚ “Divided We Fall”‚ “United We Stand”‚ “Cry Our Beloved Country”‚ as well as images of the South African flag.

The bakery has a strong presence on social media‚ with over 100 000 followers on Facebook. Biess said she began advertising the cupcakes on Thursday night on social media and quickly started seeing retweets. “We had no idea if it would be dead today‚ but we’ve had a really good turnout‚” said Biess.

Cupcakes with slogans aren’t new to Charly's. Biess said that whenever a big event happened‚ she and her daughters brainstormed when to write on their cupcakes that would elicit a giggle and have them flying off the racks.

Previous notable cupcakes have included “Honorable Speaker” in response to the Economic Freedom Fighter's Julius Malema and his antics in Parliament. “Don’t touch me on my studio” was another in response to former AWB leader André Visagie's infamous interview on the SABC and “Vote” cupcakes were a hit during the elections.

*Sealy McMurrey and Alexa Cole are on an SIT Study Abroad program () and produced this story in association with Round Earth Media.