WATCH: 'I believed I was going to die', says DA supporter attacked at anti-Zuma march 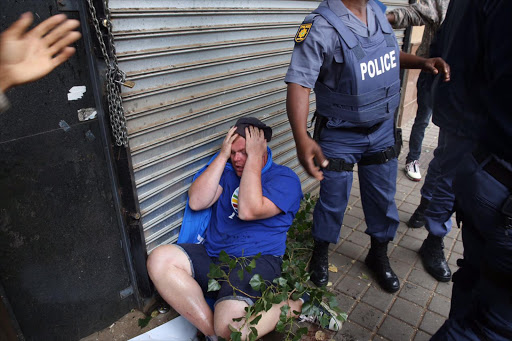 A DA supporter was attacked near Lithuli house by a handful of pro-Zuma supporters in Johannesburg on 7 April 2017.
Image: ALON SKUY

Kade Guerreiro‚ the DA supporter who was attacked and knocked unconscious near Luthuli House on Friday says he will join those marching to the Union Buildings on Wednesday‚ despite the trauma of his first political demonstration.

"It's been such a roller coaster. Now I've got motivation to get more involved [with politics]‚" said the 25-year-old‚ who only became a Democratic Alliance member two weeks ago.

Guerreiro‚ an antique dealer from Johannesburg‚ was one of thousands of DA supporters who met at the Westgate Transport Hub in Newtown in Johannesburg on Friday to take part in one of the many anti-Zuma marches across the country.

After the march‚ he and a friend decided to walk back to their car which was parked near the High Court in Johannesburg. It was while they were walking down Albertina Sisulu Road‚ near Luthuli House‚ when they were attacked by a group of ANC supporters.

"What had happened was that we were told to stay away from Luthuli House‚ and obviously we did‚ we were two blocks up… making our way to the car. A man came behind us‚ screaming and said 'run‚ run'. Obviously we started running‚" he said.

Guerreiro was seen running away from a group of people‚ some carrying sticks‚ branches and rocks. He was unable to escape‚ and got cornered meters away‚ where he was assaulted.

"Something must have hit my head… I hit the floor‚ people starting kicking and punching me‚" he said.

He said he wasn't able to recall the entire attack‚ as he must have "passed out and woke up a few times" during the attack.

"I believed that I was going to die‚" he said.

Luckily for Guerreiro‚ nearby police officers were able to intervene and stop the attack.

"Basically from there if it wasn't for the police… I don’t believe I'd be privileged enough to be here today‚" he said.

He sustained a cut to his head which required four staples‚ a concussion‚ and multiple scrapes and bruises. He has no medical aid and estimates he has had to spend at least R10 000 on medical bills as he had to replace his specialised spectacles.

Guerreiro spoke outside the Johannesburg Central police station where he had gone to open a case of assault.

Guerreiro said he didn't harbour any bad feelings toward them.

"I actually pity them. I say that because, are you happy to have attacked another South African? You were happy to kick me in the face while I was down," he said.

"I am even more involved now. As a young South African it concerns me that this is the path that South Africa is currently on.

Guerreiro said he would be attending the march taking place at the Union Buildings on Wednesday.

"We are the youth of the country and we have a huge opportunity to make change as South Africans‚" he said.