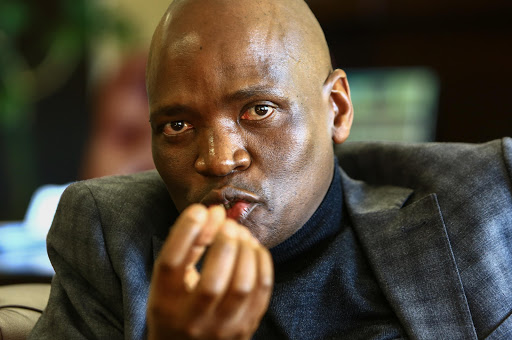 Suspended SABC executive Hlaudi Motsoeneng has fired yet another broadside at the public broadcaster's interim board‚ accusing it of "playing to the gallery" after it charged him with bringing the company into disrepute.

Motsoeneng's lawyers say the interim board is dealing unfairly with their client because it failed to institute disciplinary hearings against the former SABC COO within 14 days of its appointment.

Motsoeneng has been served with fresh disciplinary charges for allegedly bringing the SABC into disrepute after attacking the interim board‚ and mocking a recent parliamentary inquiry into mismanagement at the broadcaster‚ during a media conference he held last week.

Now the interim board wants Motsoeneng to explain why he should not be summarily dismissed. But his legal representative‚ Advocate Zola Majavu‚ said a letter to this effect that was sent to Motsoeneng violated labour laws.

“(It is unprocedural) and that’s the point. What the interim board was supposed to do was to institute a disciplinary inquiry against him as per the court order within 14 days of their appointment‚" said Majavu.

"They have not done that. Instead what they did‚ they latched on the fact that he addressed a press conference‚ rightly or wrongly. They are now latching on that‚ saying ‘tell us why you should be not be dismissed’.

The High Court in Cape Town last year found Motsoeneng's appointment as SABC group executive of corporate affairs unlawful and irrational. It ruled that he may not hold any position at the SABC until he faced a satisfactory disciplinary hearing or the findings and remedial action by the public protector have been reviewed and set aside by another court. According to the court ruling‚ the new board‚ once appointed‚ should within two weeks deliver a letter setting out the disciplinary charges against Motsoeneng.

"They are not saying on top of the charges the court said we must put to you‚ we are adding these other charges and you must attend an inquiry in the normal sense‚” said Majavu.

"And that is why we are saying you guys are not even complying with a court order. Yet you are trying to embark on this summary process. The interim board now is playing to the gallery because they want to do the same thing that the court said they can’t do in the case of the SABC eight‚” said Majavu.

Last year the labour court set aside a decision to dismiss eight SABC journalists who opposed a ban on covering protests.

Asked if Motsoeneng was being targeted‚ Majavu said he did not know. “I don’t even want to entertain conspiracy theories‚ so from where I’m sitting‚ I wouldn’t even get into that debate. He thinks so himself‚ but that’s his view‚” said Majavu.

The SABC’s interim board told Parliament on Monday that the broadcaster was facing a “multiplicity of crises”‚ ranging from cash liquidity problems and a loss of credibility and audiences.

The board told MPs that one of their priorities was to reverse the 90% local content policy‚ which was introduced controversially by Motsoeneng and has cost the SABC a loss of more than R200 million as it drove listeners and advertisers away.