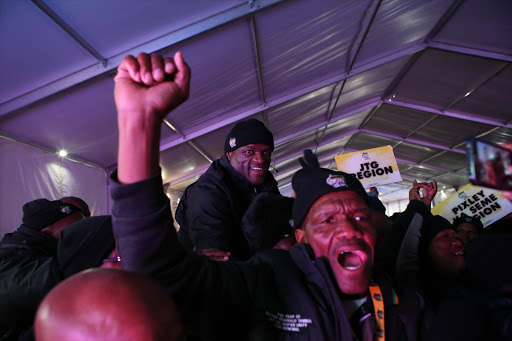 Newly appointed ANC provincial chair Zamani Saul is greeted by supporters moments after the announcement of his win at the Northern Cape elective conference in Colesburg.
Image: Alaister Russell

ANC deputy president Cyril Ramaphosa’s campaign has received a shot in the arm after Zamani Saul was elected chairperson in the Northern Cape.

He was elected unopposed because his rival‚ Northern Cape Premier Sylvia Lucas‚ declined nomination at the provincial conference in Colesburg on Friday afternoon.

In a shock move‚ the rest of her slate‚ who were in the running for the other four top positions‚ also declined nomination.

Lucas thanked her supporters for “the privilege and honour to be nominated for provincial chair. Unfortunately I would not accept‚” she told the gathering.

Saul is known to back Ramaphosa‚ while Lucas is regarded as being pro-Zuma.

Tensions between Saul and Lucas escalated when‚ a day before the Colesburg conference began‚ Lucas reshuffled her executive without consulting the ANC.

Questions will now be asked whether the province’s new leaders will purge Lucas and her supporters in government.

Maruping Lekwene was appointed the new deputy secretary of the Northern Cape.