WATCH: Brian Molefe dances his way back to Eskom 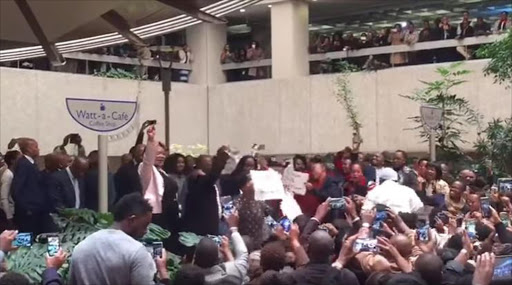 CEO Brian Molefe shows off his dance moves on his first day back.
Image: YouTube/TimesLIVE

Brian Molefe was given a roaring welcome from Eskom employees as he reported for work on Monday‚ just months after stepping down from the power utility.

Molefe‚ who became an ANC member of parliament after leaving Eskom‚ was busy in meetings at the parastatal in the morning‚ despite a public outcry over his return to Eskom.

It emerged on Friday that Molefe had resigned as an MP in order to take up his former position‚ which he had previously occupied for 18 months.

Speaking to TimesLIVE at Eskom's head office in Johannesburg‚ board spokesman Khulani Qoma said that Molefe had reported for work around 7:30am and was surprised that people were camping outside the gate waiting for him to drive in.

"The CEO came to work in the morning and we've had a very smooth start with no issues. Mr Molefe reported to work as per normal procedure and he has been able to have two successful meetings already with the senior leadership of Eskom this morning and everybody is excited to welcome him back‚" Qoma told TimesLIVE.

He added that the CEO would meet with Eskom stakeholders during the week.

Molefe‚ he said‚ drove through the main entrance and was not prevented from entering the premises.

Molefe was welcomed by staff members‚ who filled the foyer and vantage points above it. They sang pro-Molefe songs. He said he was excited to return and urged workers to work tirelessly to ensure there was electricity during the winter months.

"Thank-you for a very warm welcome. We must continue with our mission of keeping the lights on and this winter we want very few incidents. All of us must react very promptly where we experience problems during winter‚" said Molefe.

"We must continue with our nuclear programmes to ensure that South Africa has electricity that meets growth‚" he added.

Molefe returned to his old job after a dispute over whether he was entitled to a R30 million payment after stepping down "in the interest of good corporate governance" in November 2016.

Outside the power utility's head office in Sunninghill‚ a large media contingent and political parties had gathered‚ expecting him to drive through.

Molefe announced his departure from Eskom at a dramatic press conference‚ where he tearfully denied any impropriety and made his famous comment about a shebeen in Saxonwold – a suburb where the Gupta family lived.

His proximity to the family was laid bare in State of Capture‚ a report compiled by former public protector Thuli Madonsela.

Sunday Times reported yesterday that Molefe's reinstatement could give Moody's yet another reason to downgrade the sovereign credit rating to junk status.